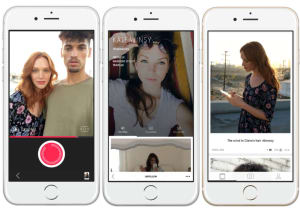 Polaroid Swing launches in Australia with some big name investors

The app, launched out of Silicon Valley earlier this year, aims to reimagine photography by capturing an interactive “image”, which is a one-second video that users can scrub through – either by dragging their finger across the screen or tilting their phone from side to side.

It captures video at a rate of 60 frames per second, with the company’s own “frame-blending algorithms” smoothing out the transitions.

It is the result of a partnership between the Polaroid brand and a Silicon Valley tech startup chaired by Twitter co-founder Biz Stone. It was founded by former McKinsey consultant Tommy Stadlen and created by former Apple engineers.

“We are thrilled to bring the app to Australia. Australians have been experimenting with Polaroid ever since the great fashion photographer Helmut Newton set up his studio in Melbourne. I am excited to see what a new generation of Australians does with the reimagined Polaroid medium,” Stadlen says.

The Polaroid Swing app aims to make available a new medium of expression, entering a competitive market to help people capture moments as they see them. With the help of Lund and Tribe, Polaroid Swing also hopes to tap into influencers to promote its service in Australia.

The company gained significant traction in the US when Apple selected the product as the main featured app on the US App Home Store home page and a new iMessage app store. This month, Apple has chosen Polaroid Swing to appear in physical retail stores across the world to demo the new iPhone.

It also gained traction with brands in the US, working with five companies in the US and Japan to create content for their social channels and website.

“Human beings see the world in short moments, not in stills or videos. Memories move, and now photos do too. The product combines Polaroid's iconic heritage with cutting edge innovation,” Stadlen says.

Next year, the company will continue to focus on building out its ad service offering as well as developing a hardware product.

“Polaroid Swing has the potential to change the way we think about images, just like Twitter's 140 characters changed how we think about words. People will start seeing the world in one second moments. It's a genre-defining medium," Stone says.