Joe Hildebrand: The Caxtons as a hotbed of soullessness and decadence 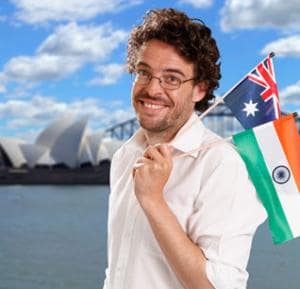 As anyone who’s been there will know, Hamilton Island is a place characterised by soullessness and decadent wealth. No wonder the advertising industry feels so at home there.

This year I was delighted to host the Caxton Awards, which was a fortunate coincidence given that I had been forced to do so by my boss.

The Caxtons are enormously important because they give ad people the opportunity to really express themselves and their art, which is something they never get a chance to do except for every single day of their working lives.

But the Caxtons are different, because advertising “creatives” get to talk to each other, which is all they really want to do anyway.

Usually this requires extracting millions of dollars from a major company to make a state-of-the-art multi-platform conceptual brand repositioning campaign that nobody else understands except for other creatives who marvel at its brilliance.

But thanks to the Caxtons a creative can simply show a PowerPoint presentation of his or her state-of-the-art multi-platform conceptual brand repositioning campaign and they can all marvel at its brilliance right there on the spot.

Not only does this give the creative a major endorphin hit and warm inner glow but think of the money saved.

Indeed, that is just one of many things that ad people and journalists have in common. We also both specialise in the telling of stories designed to inspire and move our audience, although of course one type of story is completely fictional and based on emotional manipulation and the other is an ad. (Dear Federal Government: THAT IS A JOKE. Please do not hold another media inquiry, we simply don’t have the time.)

But the best thing about the advertising industry is that it pays my wages, although of course I never let this influence decisions about the publications I write for or the opinions I hold.

Well that just about wraps up my article for AdNews about how fantastic ad people are and how society owes them a great debt of gratitude for all the wonderful work they do.