Jeff Goldblum stars in campaign for Menulog by Y&R 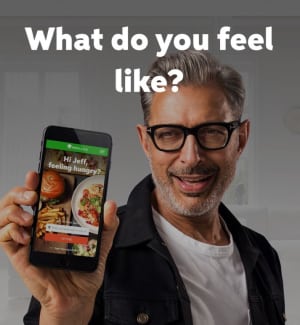 Jeff Goldblum is the new ambassador for Menulog

Jeff Goldblum is the star of the latest campaign from online takeaway food delivery company Menulog.

The ads show Goldblum awkwardly intersect two situations, with the main goal of encouraging people to order through the Menulog app rather than over the phone.

In the first spot he takes the phone of a woman attempting to order Pad Thai.

“What are you doing? Sophie’s having a good cry over a break up and you’re going to pick up the phone and order food out loud?” he says.

He then pulls out his Menulog app and show the ease of the service, adding: “Silence is Goldblum”.

In the second ad, a man mutes the TV to order pizza for his friends. It finishes with the tagline: “Less talk, more eat”.

Goldblum’s new role as Menulog ambassador answers questions around what the actor was filming in Sydney last month, including his initial stunt in a Sydney food truck delivering sausages.

The campaign is by creative agency Y&R. It follows a creative pitch held by Menulog, which AdNews understands included Richards Rose and Havas. The incumbent agency had been M&C Saatchi since 2015, which declined to pitch for the business.

Menulog worked with Y&R on a project basis but hopes to have an ongoing relationship with the agency.

Menulog head of marketing Tasman Page says the campaign leverages the finding that only 20% of Australians order online.

“We’re so proud of this campaign and we think it’s something that will really resonate with Australians. We’ve all experienced the pain of trying to order something over the phone and yet only 20% of us order online. We wanted to create a campaign that spoke to this issue in a really humorous and memorable way, and Jeff certainly helped us do that.

“Jeff’s personality, in his unique sense of humour and openness, really allowed us to push the boundaries across all creative elements. His star status in everyday Aussie situations is a hilarious moment in itself, but when you add in the ingenious concepts from the team at Y&R you have a really exciting campaign."

The campaign aims to raise brand awareness and trial among new consumers, while driving frequency among existing customers by offering new deals. It features a series of short films, radio and digital content, with Goldblum in different situations tailored to suit broadcast, out-of-home, digital and social platforms.