Ooh!Media ramps up investment in airport advertising and Fly division 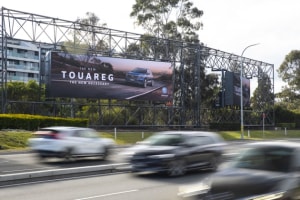 Six new large format digital billboards will reach audiences on their way to and from airports around the country as part of oOh!media’s Fly network.

The new digital billboards include two on Joyce Drive – the gateway to Sydney Airport – that impacts international travellers through T1 and domestic travellers using the T2 and T3 when arriving or departing from 1 July 2019.

The Sydney sites will be followed by three new digital billboards at Brisbane Airport, including the largest digital airport advertising screen in the country known as “Big Mortey”, “The Drop” on the skywalk and the “Brisbane Boss” at the taxi rank.

There will also be another at Newcastle regional airport, which is now the 13th busiest airport in the country.

“Added to our other products, including Longreach, Touchdown, Boulevard and Collect and Connect, the Qantas Club Q-View product and Qantas inflight, we can help advertisers reach passengers on approach to the airport, within the Departure Lounge, at baggage collection carousels and while departing from major airports across the country,” Dery says.

Dery says the Joyce Drive billboards at Sydney Airport will be offered on a product exclusive, with AM and PM day parting, allowing advertisers the capability to target audiences reflective of their mindset at those times of day.

“Among the first advertisers to use these new assets is Volkswagen, which will launch the new Toureg with an end-to-end campaign that also includes the Qantas Lounge and Qantas Inflight Entertainment and oOh!’s departure and arrivals network,” he says.

The investment in the large format digital billboards at airports follows on from the installation of two super-sized billboards on the approach to Melbourne Airport, known as the Twins, which span 320sqm each.

“We identified ‘airport’ as a key environment for our target audience, by utilising the various formats we can ensure we are reaching them at multiple touchpoints across their airport journey and experience.

“The combination of high impact, high dwell and premium environments positioned across the passengers journey; to/from the airport, at check in, within the lounge right through to onboard, will allow Volkswagen to reach the Qantas audience in an engaging way across their whole passenger journey.”

At its recent annual general meeting, oOh!media told shareholders it was sticking by its guidance made in February for underlying EBITDA (Earnings before interest, tax, depreciation and amortisation) of between $152 million and $162 million.