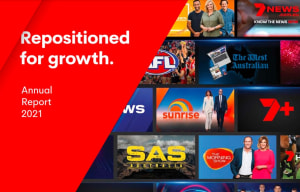 James Warburton has done well in terms of pay in the two years he has been CEO of Seven West Media.

The latest annual report shows his total pay, using statutory disclosures, at $4,571,574 for the year to June.

However, the company also provided what it calls a summary of Warburton’s “actual remuneration” -- the value of what he received in total.

The period covered by gthe annual report included the depths of the economic fallout from the pandemic but since then revenue from free-to-air television has been booming.

In full year results announced yesterday, Warburton said metropolitan free-to-air TV advertising market rebounded strongly, up 25.8% in the six months to June and up 11.5% over the year.

The media group reported revenue of $1.27 billion, up 3.5% driven by a recovery in the metropolitan TV advertising market and the growth of 7plus.

Warburton has also slashed costs. Operating costs are down 7.5% to $1.022 billion.

That led to a 240% increase to $125.5 million in underlying net profit after tax for the year to June.

Statutory net profit after income tax was $318 million on group revenue of $1.276 billion, up 3.5% on the previous year.

The improved TV advertising market is so good the company decided to reverse a TV license impairment of $208.5 million. And the better than forecast performance of the Olympic Games Tokyo resulted in a $20.6 million reversal in the Olympics onerous provision.