Ita Buttrose complains about Canberra’s treatment of the ABC 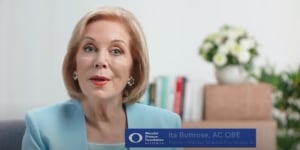 The Age newspaper reports that Buttrose sent a letter to Fletcher saying the minister failed to provide key information to the ABC.

This data was behind an independent report proposing the closure of two broadcast channels and the sharing of back-office and other services with SBS.

"We raised a number of issues but were particularly interested in seeing 'the information - data, models and assumptions - which formed the basis for the savings estimates provided in the report'," Buttrose wrote, according to report in Nine Entertainment titles.

"I appreciate you have a busy schedule but we would appreciate an answer to our queries."

The ABC this week announced cuts to programming and the loss of up to 250 jobs as part of a five-year plan to address funding cuts from the government.