It's no phase; podcasts on same trajectory as SVODs says SCA CEO 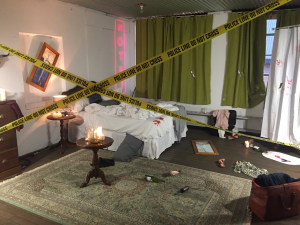 Guests stood in a crime scene while listening to a snippet from an SCA podcast.

The podcast punch out is well and truly on with Southern Cross Austereo (SCA) pulling out all the stops at its official PodcastOne launch last night.

Attendees, largely made up of agencies, clients and podcast talent, were split into groups, given audio devices and taken on a sensory tour through the rustic warehouse space of 901 Bourke Street, Sydney. From a murder scene – plugging its crime podcast, a locker room scene – promoting The Howie Games sports podcast, and a lavish dining table set up – promoting MasterChef star Gary Mehigan's podcast, SCA wanted its offering to hit home.

Guests were then treated to a CEO address from Grant Blackley and a quick-fire Q&A with podcast stars.

While announcing its podcast plans back in November, since then SCA has been beavering away to get the offering, with US-founded 'PodcastOne', ready.

“We had to get it right. We didn't want to overcook it or undercook it, SCA CEO Grant Blackley told AdNews at the event.

Blackley also revealed to AdNews that SCA is in talks with Amazon and Google Home, looking at how it can get not only its radio content, but its podcasts onto the voice automated devices.

He said SCA's podcast offering isn't about becoming the 'Yellow Pages' of podcasting and showing off how many hours it has in back catalogues, it's about showcasing and delivering unique and desirable content with more of a personalised edge.

“It's not about re-runs and catchups – we already do that,” he said.

“We’ve seen an explosion in consumers appetite for video on demand with Netflix and Stan and people are hungry for personalised audio they can listen to how and when it suits them.”

In the months between SCA revealing its podcast plans up until last night's launch, Nova Entertainment got in on the action and upped its focus on podcasting by becoming the exclusive sales house for all podcast inventory hosted on tech platform Acast in Australia, which it revealed last week.

All networks claim to be working with the 'best in-class' technology, complete with improved metrics and dynamic ad insertion. Blackley said SCA had considered Acast but the brand just wasn’t the right fit for them.

The PodcastOne network consists of specially curated podcasts for Australian audiences with selected premium original long form domestic podcasts together with the most popular US PodcastOne podcasts.

Blackley says SCA's point of difference is the exclusivity and originality of its content and that SCA's offering, which features podcasts from well-known author and comedian Rosie Waterland; Australian businessman Mark Bouris, and many more, is the most premium offering in market.

Looking back to his CEO days at Channel Ten, he sad it's the premium content that wins out and that is its edge in the market.

Despite podcast fanfare and what seems a mass rush to market, Blackley tells AdNews that podcasting is no phase.

“Podcasting is here to stay,” Blackley said, adding that “marketers will buy”.

In response to questions about if there really was lots of money to be made in podcasting, Blackley said “absolutely, everyone makes money”.

“Podcast awareness is growing but we still have to educate the market,” Blackley says.

“We are going to have an unrelenting focus on this.”

During the live beta phase the PodcastOne the radio network has been steadily growing with more than two million downloads in the first month.