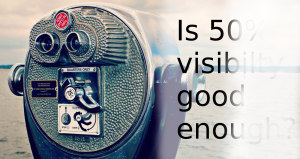 It found that although the current MRC viewability benchmark (see below) does have an impact, it could improved by increasing the visibility of display ad creative.

The findings will renew calls for the MRC to revise the current viewability standard, which stipulates that 50% of pixels must be in view for one second for static and two seconds for video.

AdNews understands the MRC has been in contact with Nelson-Field over the the work, which was released to WARC earlier this month and partly presented at ReThinkTV last week.

Previous research has focused on how the MRC standard affects things like ad fraud, the opportunity to see advertising and other factors required to provide a minimum level of viewability for online platforms.

This study took it a step further and looked at the efficacy of viewability. It measured how visibility (the proportion of pixels in display) and length of time an ad is viewed correlates with short-term advertising strength, an index that measures the short-term impact of advertising on sales.

At the MRC benchmark level, it found that being exposed to advertising on Facebook has an 18% uplift in sales while on YouTube it is 16%, which indicates that it is still better than no standard.

As the visibility increases between 50% to 100% of pixels on screen, so does the sales impact. The data showed that 100% visibility consistently outperformed the MRC standard (50%) by at least twice as much irrespective of the amount of time on screen (see chart above).

The study concluded that pixels on screen accounts for 70% of the uplift in sales impact, while duration is responible for 30%.

On Facebook, most ads are viewed for a few seconds or less, which would make increasing the time metric commercially harmful to the platform (see beow). 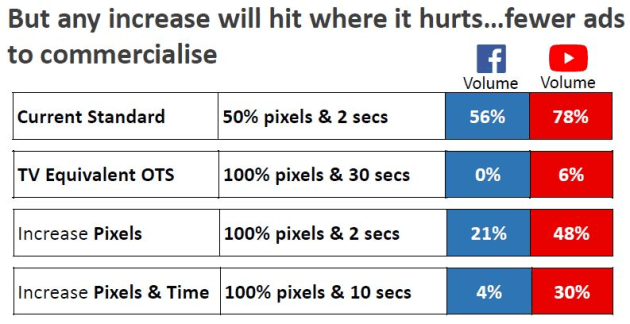 When GroupM expanded its 100% viewability policy to social newsfeeds, it wouldn't commit to a set length of time, only recommending 50% of duration while more reasearch is carried out.

Any future MRC revisions will need to weigh up how this impacts major advertising platforms commercially.

The study also used gaze technology to measure the difference of active versus passive viewing. Facebook has a very high level of passive viewing (eyes on screen but not ad), which helps its overall effectiveness compared to YouTube, in which a significant number of ads are avoided or skipped.

It is the combination of active viewing (eyes on screen and on ad) and passive viewing that contributes to the overall effectiveness of advertising.

Nelson-Field tells AdNews that current MRC standard does have a benefit to ensure paid for advertising provides a sufficient opportunity to be seen, but the effectiveness can be greatly improved with coverage, the percentage of a screen that an ad covers.

“We can see that the greater level of coverage translates to more sales across any platform, whether its online or TV. Even though the viewability standard is not for TV, we can see that the results hold beyond an online environment, regardless of device or the specific platform or website.”

Check out how online coverage compares to TV and Facebook's response.

Nelson-Field explains that the MRC are “in between a rock and a hard place” when it comes to creating viewability benchmarks that allows online publishers enough inventory to commercialise while ensuring there is sufficient opportunity to see ads.

This research suggests the balance has probably been weighted too much towards media platforms' interests rather than advertisers, and a revision is in order.

“On behalf of brand owners, I think it is time to revisit the standard and particularly to include elements like coverage," Nelson-Field says.

“Calling for a more universal standard, one that's not just pixels but includes absolute size on screen in appropriate, given the research.

“The MRC are looking at a cross-platform measure for video, so including a measure like coverage would take into account differences in fairness to the platform.”

“Facebook's engagement on mobile devices is slightly stronger because people are looking at it quite closely,” Nelson-Field says.

“But we expect the patterns to be the same regardless of device or platform. The STAS scores and attention scores could vary but it will all be relative.”

What is clear is that attention matters and the more pixels on screen, drives greater attention and sales results.

This study may sound like a case of stating the obvious, but provides actual evidence to challenge the status quo, where 50% of an online ad needs to be viewed for billing purposes.