IPTV takes a ride on the wave of digital explorers 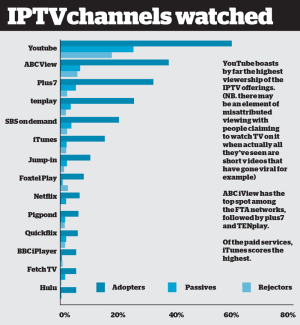 If you want to know how this whole Internet Protocol TV thing in Australia is going to shake out, look to the pioneering audience of the space for the clues.

That’s the call from research outfit Edentify, which has released a new study into IPTV habits in Australia that it has been conducting since January.

“I think the biggest thing that stuck out for us is the size of the audience which is only watching IPTV,” director of Edentify Dan Banyard said.

It found that 62% of people can be considered IPTV ‘adopters’ – those who currently watch some form of online TV and plan to do so again. This is up from 53% in just a few months. Conversely, the number of people rejecting IPTV outright is on the wane too, down to 4% from 10% over the same period.

Edentify, however, is interested in one particular segment: the pioneers. Of the 62% who can be considered adopters, about 15% are watching IPTV almost exclusively.

While that accounts for roughly 9% of the total sample, it’s this 9% which the market should be focussing on, according to Banyard. Rather than their behaviour being driven by platform, he said, it’s being driven by content.

“The pioneers are not fed content –they actually go and find it. That’s quite a change from the traditional model, and it’s going to be the market which will be increasing at a higher rate,” Banyard said.

Encouragingly from a content provider point of view, there’s increasing recognition among pioneers that somebody down the line has to pay for content.

“What’s interesting, more broadly, is that while audiences are saying that they’re seeking out IPTV because they don’t want advertising, the catch-up TV services which are ad-supported remain the most popular,” he said.

On the flip side, subscription services such as iTunes and Netflix have held steady with their market shares – suggesting there’s no one holy grail model in the works.

“People are actually willing to pay for content, providing that it’s good content,” Banyard said. “What the research shows is that the same users are willing to mix and match their platforms, and it comes back to the [choice of] content piece – and that’s what is driving a lot of behaviour.”

Brands still not taking advantage of music streaming platforms
Pandora brings to market data analysis tool
The rise of the connected car: Pandora partners with Ford aims to be in 60% of new cars by 2015