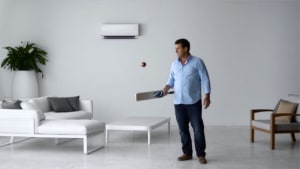 Initiative's appointment to the account follows the news earlier this week that 303 MullenLowe and Fujitsu would cut ties after 10 years, with the brand stating it needed to reassess its "thinking and approach" in driving brand awareness.

Fujitsu General Australia reported $2.9m in estimated media spend over the past 12 months (March 2018 - February 2019), according to Nielsen AdIntel.

“Fujitsu General Australia is a leading brand that is very much embedded in the Australian culture. Its category is not only competitive but requires agility and innovative thinking to stay relevant," Initiative CEO Melissa Fein said.

"For Initiative, this provides the opportunity to deliver our true craft; creative thought-provoking strategies, that are backed by analytical data led cultural insights”

Fujitsu General credited the appointment of Initiative to its demonstration of market-leading thinking; creative in application, and supported by rigour and data.

The appointment follows a competitive pitch process which commenced in December 2018 and concluded this month.

“Initiative showcased outstanding thinking that turned what we know about our category on its head. Their insight into how our brand currently interacts in culture, and how we can make a difference in the lives of our consumer, was truly a differentiator," Fujitsu General Australia national marketing manager Zdenka Micallef said.

The news caps off a announcement-week for Mediabrands, which revealed on Tuesday that its current CEO, Danny Bass, would be exiting this business. It also saw its digitally-led agency Reprise scoop up two key accounts, which included a seat on the South Australian Government's media panel and the media account for Monash University.