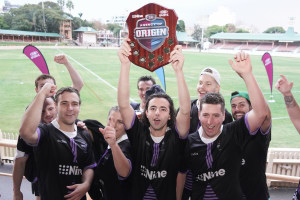 The Independents have been crowed the Agency of Origin for 2018, stealing the title from long-reigning champion Carat.

Kicking off at the North Sydney Oval this week in front hundreds of media buyers from multiple agencies, the Independent agency team defeated PHD 7-0.

This year they broke out midway through the day defeating Publicis and MediaCom to earn their way into the final.

The team comprised of Pearman Media, The M Agency and Atomic 212, assisted by Nine’s Independent Agency sales team and Dan Sindoni from SCA, secured the title.

As the rain pelted down, Atomic 212 creative strategist Ollie Perry lived up to his business title as he repeatedly broke the line with great speed, securing the ‘Best on Ground’ award.

The M Agency’s John Makarainen returned after last year’s disappointing tournament and was a tower of strength for the team. He welcomed Jack Cleaver from Pearman Media and Dylan Mazza Atomic 212 into the fold.

Kristie Gee and Joanne Gardner were standouts in attack and defence in slippery conditions.

The win was a redemption of sorts, after a heartbreaking and somewhat controversial exit for the Indies in last year’s tournament, failing to make the quarterfinals.