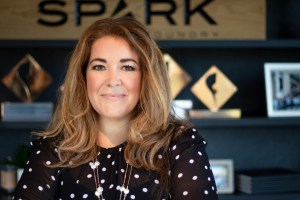 Imogen Hewitt, CEO of media agency Spark Foundry, was just a little girl when she was attracted to advertising.

Being on television was the goal. When she was about six, one of her friends was the girl who played Barbie in the Mattel ads.

“In an early sign of my competitive nature, I played hair salons with crimping shears with this little friend of mine’s impressive blonde locks, which ended up in her parents threatening to sue my parents for loss of income,” says Hewitt.

“An early lesson that advertising can be brutal.

“But I was not put off. Despite my mother’s warnings that advertising was full of posers and I wouldn’t have a job after 40, I persevered and landed myself work experience in the creative department of an agency called BAMSSB at the age of 16.”

Hewitt took her first role as a CEO in December 2019, which didn’t leave a lot of time with the holiday season ahead to settle in before a pandemic that no-one knew was coming.

She arrived at Spark on December 4, 2019. Before she could find her way round the office, she was in the global pitch for Diageo, the multinational beverage alcohol company. “I was thrown into that meeting, so that was a good start.”

It was back into the office in early January, and then it was just a few weeks when lockdown hit.

“I was walking into something that I knew would be difficult but couldn't possibly have known it was going to be quite as tumultuous as it was,” says Hewitt.

Her biggest worry was jobs in her team. “That was the primary focus for the bulk of last year,” she says. “It was certainly the thing that weighed heaviest on my mind.”

She had 120 people looking for her to provide them with a sense of stability, focus, some certainty, in an uncertain and destabilising time.

“Making the best decisions possible so we could protect the jobs and the livelihoods and the mental health of those people was something I knew would be part of the job but I didn't necessarily think it would be the front and centre focus for the bulk of my first year,” she says.

Hewitt started to look with a more detailed and critical eye at wording of communications with staff during 2020.

With remote working, and the stress of rapid change, an unknown near future, staff would read everything in detail. The chance of misinterpreting, or reading too much into a statement, was high.

“When everyone was at home, trying to navigate through stuff that was genuinely scary, I tried to provide some certainty,” she says.

“When you're not all together and you can't have that sidebar conversation to double check that what was heard was meant, there's no room for ambiguity because it creates fear. Or it creates a vacuum where people will have to fill that with their own narrative, which won't necessarily be right and can cause more disruption than is necessary.

“I sat there and thought very long and hard about every single word.”

The agency also had more staff forums — more than Hewitt had seen before. “If we could create a sense of certainty about the decisions we may need to make, and when we would need to make them, and what the horizon looked like, and what our current financial performance looked like, and how our clients are holding up, and all of those sorts of things, then we could at least minimise people's fear. So that's what we did.”

When Hewitt was thinking about taking this role, somebody said to her, only half-joking, that chief strategy officers make the worst CEOs.

But those strategic and communication skills became more important.

She has spent the bulk of her career thinking through what people need to hear, when they need to hear it, in what format and whether or not that would work for them.

“What are the possible ways they could interpret that was a brilliant skill set to have, when I was sitting there thinking about internal comms and the management of people's emotional state, more so than anything else,” she says.

“We were also obviously paying incredible attention to cost containment and all the measures that you could possibly take to make sure the business was as robust as it could be.

“But the other side of that was communication strategy, which I felt was interesting, given that people had said to me that strategists don't really make decisive decisions. They're a bit too ponderous. And they don’t make the tough calls.”

Along the way some staff were asked if they would be prepared to take a voluntary pay cut to ensure others could stay.

“We asked them one-on-one so it wasn't an awkward public conversation,” she says. “We asked anyone over a certain salary level, whether or not they were in a position to take a voluntary cut and I think 95% of people who were asked were willing to do that because it was a very clear strategy which was to protect and preserve as many jobs as we possibly can.

“And the conversation about voluntary salary sacrifice was somewhat easier because everybody bought into the fact that we were doing this for the collective good.”

Those who took 10% pay cuts were repaid in December. “That's probably one of the greatest outcomes of the success we've had this year — the ability to do that,” says Hewitt.

“And the gratitude of people, because they didn't expect us to be able to do that, and they weren't sitting there feeling resentful about it because they knew it saved a lot of people's jobs.

“That was one of the highlights of the year was when I was able to say, because of everyone's extraordinary effort, because of everyone's focus on keeping their clients as buoyant as they can be through this awful set of circumstances, because people have made sacrifices, because we have had an incredible run on new business, because we've got a proposition that I think is really powerful in terms of where we landed with analytics and strategy at the core of decision making.”

Spark Foundry ended the 2020 calendar year on top of the new business league for media agencies in Australia, as measured by consultancy R3. Wins in 2020 include Westpac, Clarins, Ancestry and Silversea Cruises. Other clients include Campbell Arnott's, NRMA, HCF, RAMS, TAL, Ateco and Hello Fresh.

Hewitt is proud and delighted by the result. When asked (as she is constantly) how she did that, she replies she had all the right ingredients on her side.

“The first thing to acknowledge is that I inherited a business that had some incredible people and talent already doing great work,” she says.

“I feel like I came in and was able to put a bow on top of some really strong fundamentals.

“Before the pandemic came into play, one of the first things we had collectively decided we needed to do was have a think about what was the vision for the agency.

“That work really was about bringing together the legacy of those two agencies. So if you think about Blue 449 (formerly Match Media), a strong legacy in data and digital, and efficiency, and analytics. If you think about Spark, it’s strong in big, bold, creative, interesting, integrated campaigns.

“And it sounds obvious now but we did a lot of work on how to bring those two things together. The fact that there were so many talented people doing great work already was a gift. It wasn't like we needed to think about how to strip out and rebuild the agency. All the ingredients already existed — they just needed some packaging.”

And the move out of the office was helped by a program for remote working already being in place.

An office move — consolidating three locations — was due March 20 and the move home happened March 25. “I think we managed that relatively seamlessly,” she says. “The Publicis Groupe Liberte program was already established, which is pretty forward thinking in terms of the flexibility, and there was already a code of conduct around how you make that work. So it wasn't a ground-up exercise in a week. It was: ‘We've got a framework, and now it's going to get a mighty test.’ And it stood its ground in that test. I think we really did have an advantage because a lot of that thinking had been done. A lot of those protocols had been established.

“But even then that doesn't really get you ready for the shock of having 120 different offices. That's what it's like when you've got 120-odd people working from home — they're all working in their own office.”

Office dilemmas disappear such as we've run out of toilet paper, or can somebody change the light bulb? Or does anybody know who our electricity supplier is?

“But you do have to deal with kids walking into frame and different people having a really different experience,” she says.

“A share house with five people in it is different to someone who, like in my case, has children who don't really care whether you're trying to work or not. They make their appearances when they feel they need to.

“And it really put the onus on us to try and work out how to create an environment where it's OK to just keep going? Yes, there are distractions. Yes, I can see you're sitting on your bed, and I can see your dirty laundry, and your husband just walked past in his undies, but just keep going.

“I tried really hard to make sure I was modelling that because I had a husband and children and work from home, and at times dodgy internet, and all of the rest of it that everybody else had. I just tried to make it really clear that the business is intruding on your home, and on the home of your children and your partners. Just do your best, and it'll be OK.”

On a personal level, lockdown had challenges. “I've got the enormous privilege of having a husband who takes on by far the vast majority of keeping the home boat afloat,” she says.

“It's a challenge when you've got kids trying to do schoolwork and me trying to not just manage the sudden working from home but still having people I've not yet met and clients I have not yet met.”

There was a perverse advantage in coming into a CEO role that year. She arrived thinking, "I know I've got the experience, but I've not yet done it."

The pandemic was something that no-one had ever dealt with.

That levelled the playing field because Hewitt, as probably the least experienced CEO in the group, was in the same boat as everyone else.

“Nobody’s done that before,” she says. “It created an incredible sense of camaraderie across all of the leaders in the group. We had to create a way to keep our people safe and secure and motivated. We banded together to get the best of everybody's experience, and try and work out how you do that. It kind of made me worry a little bit less about facing things I'd never done before because everybody was facing things they'd never done before.”