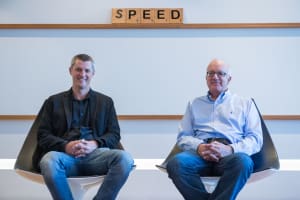 Speed has been designed to take on ‘slow, predictable and non-transparent’ practices of media agencies and bring media and creative closer together. It will “merge media and message” applying real-time data, adaptive planning techniques and flexible investment strategies.

See here for Q&A with Ian Perrin: Behind the need for Speed

As Clemenger is part owned by Omnicom Group, Speed will have access to global media tools and services through agencies such as PHD and OMD but it eschews the old media model of “aggregating client spend, developing annual deals with traditional media companies, taking kick-backs and enforcing owned technology on clients”.

That model, according to Speed, is “dead”. It’s not the first time Perrin has been part of an agency that aimed to take on the status quo. Perrin worked alongside Mat Baxter, Mike Wilson and Adam Ferrier, the original founders of Naked Australia, in the agency’s heyday.

The complexity now facing clients means that the traditional approach media agencies have operated under for 20 years doesn’t deliver, according to the new shop. Speed calls itself a “solutions company” based on agility, utiliy and simplicity.
Inspired by the pace at which businesses such as Google, Uber and Airbnb disrupted entire categories and grew to the scale that previously would have taken decades, its model goes beyond “the paradigm” of paid media.

Perrin says: “Technology has fundamentally changed the way brands are built, and because of this marketer need a genuinely different approach to communications. We are therefore creating an agency built on agility, utility and simplicity that will deliver faster results than legacy models. Faster creative integration, faster digital transformation and faster procedural automation.”

Clemenger chairman Robert Morgan is a long-time proponent of creative agencies getting back to how they were before media split out, and a more integrated way of working. Morgan says Speed will “do something in the market that no one else is” adding that it’s important for agencies to continually evolve to meet clients’ needs.

“Plenty have talked about merging channel planning inside an ad agency, but no one has done it with a media agency. This is not about re-bundling, it’s about creating new models,” he says.

It’s also aiming to tackle some of the major gripes circling media agencies with four pledges under its ‘Faster when Better’ approach. It promises the founders will be involved in every piece of business and it will limit itself to four major clients so that it doesn’t over-stretch its capacity – which has hamstrung startups before. It is also pledging to pay more than the going rate so that it can make sure it has the best people, and will work with clients on remuneration models that are based on brand performance.

As part of its mantra to be “simple”, it will make sure everyone involved in the process on the client side has a one-page summary that sets out exactly what is required, by whom, and by when, as part of its ‘Learn, Activate, Model’ (LAM) proccess.

Because “the fastest way to get from A to B is a straight line” the agency is pushing a D2M (direct to media) approach that could include deals with sales teams, in-house programmatic or helping clients trade directly with media owners.
The agency will also tackle any client brief within 24 hours to prove that it thinks differently.

Its philosophy for the challenge marketers are facing, and the need to think differently is summed up by the quote: “Remember, if you feel in control, you are not going fast enough” from Mario Andretti, the 1960s racing driver.

The agency is 100% owned by its employees and Clemenger Group, but beyond Perrin it’s not clear who else is involved in the launch.

Perrin stepped down from ZenithOptimedia in October, and Matt James took over the reins, becoming CEO of the entire Publicis Media group when it was restructured shortly afterwards

See here for Q&A with Ian Perrin: Behind the need for Speed