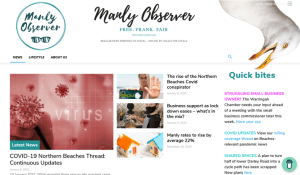 The Manly Observer news site has launched in the lower Northern Beaches, boosted by the demand for pandemic-related news in the area.

The hyperlocal news service, which also covers health, food and lifestyle, originally launched as a social-media first platform in June last year. It now has more than 2,000 followers on Instagram and 4,500 followers on Facebook.

The website was rolled out days before the most recent wave of COVID-19 hit the Sydney local government area.

Editor Kim Smee says the demand for “round-the-clock” frontline coverage of the pandemic in the community changed her original plans for a light entry into the market.

“The value of hyperlocal news really came to the fore when the second wave of COVID hit Sydney, and specifically my readership area here in the Northern Beaches,” Smee says.

“There is prolific and effective communications work going on at the higher level from NSW Health and I think the premier- and Dr Chant’s daily press conferences were first rate. But in a crisis like that some of the really detailed, ground level information gets missed."

Last year, News Corp’s Manly Daily was moved to an online-only platform in a major shake-up from the company.

During the Manly Observer’s first four weeks, Smee says it has reached 100,000 views through social media referral alone, in addition to its 160,000 Facebook reach.

“I was not so much surprised by the demand for local news than relieved by it,” Smee, who has previously worked at News Corp's local papers, says.

“I have a lot of respect for the Manly Daily journalists who still create some great content, it’s just that the new format hasn’t worked. You can’t pull out a print publication, gut the team and resources and then ask people to pay for a subscription to the metro masthead in order to access local news. Well, I guess you can, but I don’t think it’s a winning strategy. I became frustrated by what felt like an information vacuum in the community, and rational discussion of issues were being superseded by outrage posts on social media groups.

“Moderate, balanced, respectful analysis and calm on local matters was disappearing before my eyes and it got me angry enough to do something about it. I hadn’t intended on founding a news publication when I started, I just felt like I was keeping the fourth estate on life support until a bigger player organised themselves to step in. I still share content from all so-called competitors both on and via links on the website. I want to see what happens if you create a publication that is useful and informative before anything else; perhaps we can do better than a click bait and paywall model for local news. Let’s find out?”

Manly Observer covers the suburbs north of the Spit and south of Dee Why such as Manly, Seaforth, Balgowlah, Curl Curl and Brookvale. Nutritionist and freelance lifestyle writer Faye James joins Manly Observer as lifestyle editor this week, with local contributors such as columnist Wendy Kay also contributing.