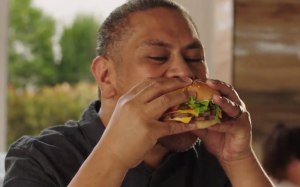 VB first ran the ad in 1968 and used it to celebrate the average working-class Australian man with the various versions largely featuring tradies.

At the end of the ad, the mix of Aussies are seen enjoying a 'hard earned burger', replacing the beer.

It also tweeted it out to its 11,000 followers with the caption: "A HARD EARNED BURGER NEEDS A BIG, AUSSIE AD. AND THE BEST AUSSIE AD IS…."

Hungry Jack's has become synonymous for its irreverent tone and cheeky marketing ploys. In 2017 it released an ad poking fun at the clean-eating trend and announced it's leaving 'wanker land' by letting people indulge in a big burger.

AdNews is awaiting to see how VB responds to Hungry Jack's.