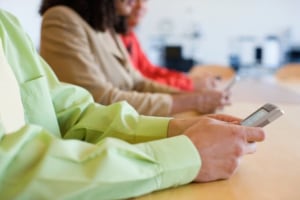 Competition watchdog, the ACCC, has outlined how Australian premium news publishers will be able to bargain with Google and Facebook to secure payment for content using a mandatory code.

The draft code is aimed at addressing bargaining power imbalances between Australian news businesses and Google and Facebook.

This infographic shows the process: 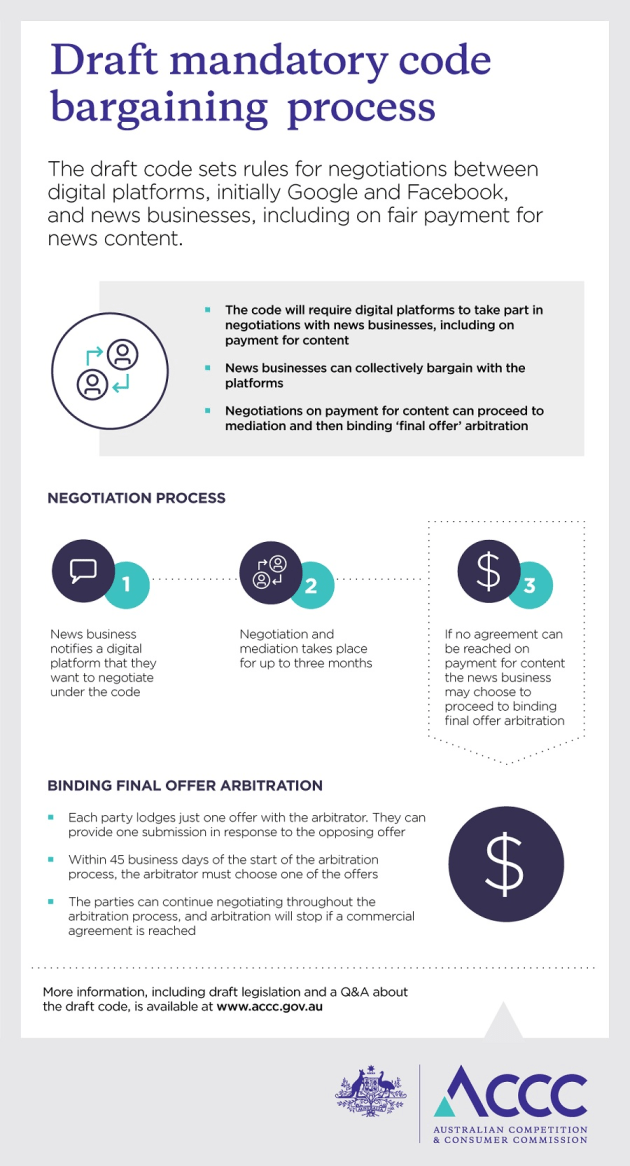 If the news businesses and the digital platforms cannot strike a deal through a formal three month negotiation and mediation process, then an independent arbitrator would choose which of the two parties’ final offer is the most reasonable within 45 business days.

This would ensure disagreements about payment for content are resolved quickly. Deals on payment could be reached within six months of the code coming into effect if arbitration is required.

“There is a fundamental bargaining power imbalance between news media businesses and the major digital platforms, partly because news businesses have no option but to deal with the platforms, and have had little ability to negotiate over payment for their content or other issues,” says ACCC chair Rod Sims.

“In developing our draft code, we observed and learned from the approaches of regulators and policymakers internationally that have sought to secure payment for news.

“We wanted a model that would address this bargaining power imbalance and result in fair payment for content, which avoided unproductive and drawn-out negotiations, and wouldn’t reduce the availability of Australian news on Google and Facebook.”

“We believe our proposed draft code achieves these purposes."

While the draft code only initially applies to Google and Facebook, other digital platforms may be added if they attain a bargaining power imbalance with Australian news media businesses.

Under the code, news media organisations would notify Google or Facebook of their intention to begin bargaining over payment for content, as well as over any other issues they want to negotiate.

The code would require the digital platforms and news media businesses to bargain in good faith, and provides for a three-month negotiation and mediation process.

Media organisations can also form groups to collectively bargain with the platforms.

“We recognise that the bargaining power imbalance between news media and the digital platforms is particularly acute for smaller media businesses, including regional and rural media,” says Sims.

“We note that 88 smaller media businesses teamed up to submit a joint submission as part of the process of developing the code. Under our plan, these businesses could again work together to negotiate with the platforms over fair payment for their content.”

Under these standards, digital platforms would be required to give news media businesses 28 days’ notice of algorithm changes likely to materially affect referral traffic to news, algorithm changes designed to affect ranking of news behind paywalls, and substantial changes to the display and presentation of news, and advertising directly associated with news.

The platforms would also be required to publish proposals for how they would recognise original news content on their services. They would also need to provide news media businesses with flexible user comment moderation tools, including an ability to “turn off” comments on individual stories they post to digital platforms.

The minimum standards would also allow news media businesses to prevent their news content being included on any individual digital platform service.

Breaches of these standards would be subject to potential enforcement action by the ACCC.

ACMA (tralian Communications and Media Authority) would use set criteria to determine which Australian news media businesses are eligible under the draft code.

Media businesses would be eligible if the online news content they produce investigates and explains issues of public significance for Australians; issues that engage Australians in public debate and inform democratic decision-making; or issues relating to community and local events.

In addition, they must adhere to minimum levels of professional editorial standards, and maintain a suitable degree of editorial independence; operate in Australia for the main purpose of serving Australian audiences; and generate revenue of more than $150,000 a year.

The code is not intended to capture any non-news media content, such as drama, reality television, entertainment content or sports broadcasting.