Holden: Kangaroos, meat pies and Bathurst will never be the same 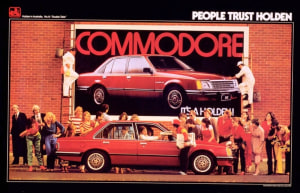 Frank Morabito is ECD at Spinach

In the end, Holden’s fate was sealed by the honchos in Detroit when they decided to cease production of all right-hand drive vehicles.

Like, who thought that sticking a Commodore badge on an imported front-wheel drive car was a good idea? Yes, an all-wheel drive six-cylinder version was available, but the damage to heritage and reputation had been done.

Some brands, like the Holden Commodore, can only stretch so far. Or if you do take a brand somewhere new, make sure you take customers along for the ride.

Undoubtedly, buyers had fallen out of love with the previous model but sales of the new model were so slow it was obvious that the Commodore brand had lost its reason for being and was not at all what customers wanted.

It had become a brand impostor.

Ford, of course, had a similar issue with the Falcon. Fortunately, for them, they chose to garage the Falcon rather than rebadge a front-wheel drive Euro import. Far better to offer the Mondeo, or better still the Mustang and move on.

We’ll never know if Ford came close to making the same mistake, but by design or good fortune, they took a different route and today their "existing users" appear to be more attached than ever.

Having exciting product coming down the new product pipeline helps, but it’s now obvious that was a luxury General Motors could not provide.

So not all of Holden’s demise can be blamed on the expedient and misguided decision to retain the Commodore badge, but in their search for new buyers, did Holden alienate their existing customer base just when they were needed most?

Sorry to see you go Holden - kangaroos, meat pies and Bathurst will never be the same again.

Frank Morabito is ECD at Spinach