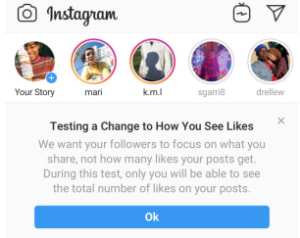 Instagram's trial to hide the number of likes on posts to improve the mental wellbeing of users has set off theories on what the motive really is.

The social media platform yesterday rolled out the changes to Australia after testing in Canada earlier this year. Instagram’s parent company Facebook said it was done to remove the pressure of chasing likes.

“We want Instagram to be a place where people feel comfortable expressing themselves,” Mia Garlick, Facebook’s director of policy in Australia and New Zealand, said at the time.

However, Australians were skeptical, referring to Facebook's use of personal data, and putting forward their own theories.

One is that Instagram is trying to kill off influencers who partner directly with brands and therefore eat into Facebook’s potential advertising dollars.

The idea is that without visible likes, influencers' clout is greatly diminished and brands will return to paying Instagram to push out their ads.

However, likes have already become an insignificant metric for influencers and brands who recognise users simply don’t engage with posts as much as they used to. Instead, they see metrics such as reach as more important.

Brands and influencer providers can also still request data on likes with the Insights and Ad Manager tool not being impacted by the change.

“The greatest commercial impact of the removal of likes is on influencer providers that are still manually using public data for their identification and appraisal processes,” Detch says.

Facebook is working on pulling in more money from influencers in other ways. Last month it made it easier for brands to promote organic branded content, which Natalie Giddings, The Remarkables Group MD, says will result in brands rerouting more advertising dollars to Facebook or Instagram rather than to influencers.

Influencers themselves have largely welcomed the move, saying it allows them to perform for brands without the burden of having to prove themselves to others with public metrics.

While there’s doubt over how effective removing a metric actually is in improving the mental wellbeing of users when Instagram remains filled with body and lifestyle images, social media experts are confident it will have an impact.

“User experience is hugely important for social platforms; and if happier people are more receptive to advertising, then an improvement for users also results in improved ad efficiency, and ultimately results in increased ad spends,” Sarna says.

“So in that sense, for Instagram, users, and brands, it’s a win-win-win.”

Another problem it could address is fighting fraudulent activities such as "like bots" and "Instagram pods" (influencers who band together to increase their mutual account engagement metric), with Sarna saying hiding likes will have a “major impact” on.

“I hope it continues the maturation of social media as an effective communications and media channel for brands’ business objectives," he says.

“Moving away from chasing likes is a huge step for the industry. It will also shift the focus with influencers, away from context-deprived engagement, were the likes for the brand shown, or for what he/she was wearing?, instead now to how their activity helps the brand.”