Harold Mitchell on the Packers, the Big Banana, debt, junkets and his autobiography 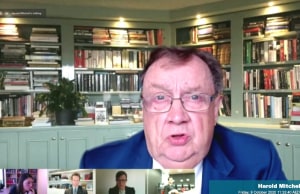 Adman Harold Mitchell, considered the father of media buying in Australia, fronted an inquiry into the ASX-listed Crown Resorts by the Independent Liquor and Gaming Authority inquiry, giving evidence as a board director of the gaming and hotel group.

The philanthropist, who was inducted into the AdNews Hall of Fame in 2012, appeared on Friday by video link, a bookcase as background (EDS: Confirmed the bookcase is real and not virtual) from his home in Melbourne.

“If my dog barks every now and again, I apologise,” he said after yapping was heard in the background. Mitchell is known to have a small dog called Lilly.

The inquiry is looking into reports of money laundering, organised crime and the arrest in China of 19 Crown staff in 2016.

Asked about the reported criminal activities of high roller gamblers, Mitchell said he had not initially been aware of the details of junket operators who brought big spenders to the casino.

He had only a vague understanding at that time of what they did.

Scott Aspinall, counsel assisting the inquiry: "Are you aware now what a junket is?"

Mitchell said it had now been sometime since he first heard the word. "I hope that I never hear it again."

The hearing was also treated to insider details on how Mitchell became a board director at Crown and his long relationship with the Packer family, one-time television station and magazine owners and now investors in casinos.

In 2011, Mitchell received a phone call from James Packer, who was then the chair of Crown, inviting him to be a board director.

He says the main thing he and James Packer spoke about in the years that followed was how to keep your weight down. The hearing also heard that Mitchell and Packer had used whatsapp to communicate.

Mitchell, asked how he became close to the Packer family, told the inquiry he started his media planning business in 1976.

At that time, Kerry Packer, who was three years older than Mitchell, was taking over running the Nine Network from his brother Clyde.

“I didn't have too many clients,” says Mitchell.

“I liked the idea of live cricket guidance because, quite simply as an advertising person, between a cricket game and each over there's 30 seconds and you haven't got time to get a cup of tea or go to the toilet … you just have to watch the ad.

“Mr Packer found out that I -- this tiny company -- was responsible for about a quarter of the ads in the cricket.

“We were good friends because of those various circumstances.”

"I took a small shareholding in the Big Banana,” he said. This is a tourist attraction and amusement park at Coffs Harbour, NSW.

Mitchell looked back in regret at the investment: “What was I thinking; what was I possibly thinking? Never invest in things you know nothing about."

He got into trouble when the 1990 economic downturn hit. He had given personal guarantees in some businesses in which he was a minority shareholder.

"And then along came the recession we had to have and it wasn't looking good,” he said.

“The other shareholders disappeared into the banana fields and I was left alone. I wasn't going to walk away from it. I was going to have to deal with it.”

Under questioning, he agreed that he was facing bankruptcy or insolvency.

Mitchell at the time had told Sam Chisholm, a former CEO of Nine, about his “dreadful debts” to which he had given a personal guarantee.

Kerry Packer then made contact and, according to Mitchell, said: “Harold, I hear you’ve got some problems, son (he called everyone son). How can I help?”

Packer kept shaking his head when Mitchell explained. Packer: “Why would you give a personal guarantee?”

Mitchell got an interest free loan of $1.9 million from Kerry Packer to get him through the crisis.

“I still recall this incredible moment because there were no strings attached,” said Mitchell.

“Kerry was just like that. No one would know and it wasn't until after he died that anyone knew. I paid it back, of course. It took a long time but I got there with all of it.”

The experience had a long lasting impact on Mitchell.

Later, on questioning which touched on Cown’s debt, Mitchell said: “I hate the thought of debt. We should all be liquid.”

Of his book Living Large: The World of Harold Mitchell, an autobiography, he said: “I’m not sure if I should have written that book.”

Mitchel was questioned about whether he felt he owed the Packer family a debt because of the loan that bailed him out during the 1990s.

The inquiry quoted Mitchell’s book as saying he would “never forget the kindness” of Kerry Packer.

The book reveals that James Packer was an investor in emitch, the digital agency he launched in 1999, and which later became the ASX-listed company Mitchell and Partners. (Mitchell sold to Aegis for $363 million in 2010.)

Q: And did you feel like you owed a favour to the Packer family?

Mitchell: "No. ... we didn't operate that way. That isn’t the way it works. I wouldn't have had that many clients if we didn't act entirely on behalf of the clients of the biggest company in Australia, in the media business, 20% of all the advertising."

Q: "Wouldn't it be natural to expect that someone would think that you owed the (Packer) family a favour?"

He then offered to sign a copy of the book for the counsel assisting the inquiry if they met in person.