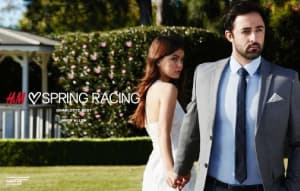 H&M is launching its first Australian created brand campaign since launching in the region as a retailer this year. But instead of tasking an ad agency to create the work, it has partnered with Bauer's Elle magazine to launch a campaign, as well as native content series.

The retailer, which has four Australian stores, is planning another Sydney store later this year in the CBD. It has appointed Stellar PR to work on the launch and events strategy.

The campaign, which stars model and actress Charlotte Best and TV chef Andy Allen who are a couple, was styled by Elle Australia’s style editor, Dee Jenner, and shot by Bauer Media photographer Kristina Soljo.

The brand campaign is geared around spring racing season. All H&M's previous activity has been tactical to promote store launches, with a big focus on outdoor activity.

“The ‘H&M Love Spring Racing’ campaign has a dynamic feel that really encapsulates the modern, fresh spirit of both our brands. I also love the intriguing backstory, with the creative featuring real-life love interests’ Best and Allen.”

The multi-channel campaign kicks off this week with ads running in Bauer titles Men’s Style Australia and Elle Australia. There will also be digital activity and in-store creative in Sydney, Melbourne and Brisbane.