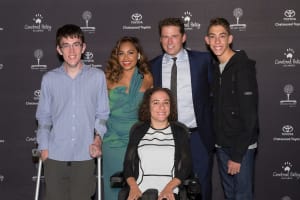 The media industry has raised $1.95 million to help those with cerebral palsy find work as part of a fundraising golf weekend – the largest single amount in its 21 year history.

The who's-who in the media headed to the Hunter Valley this weekend to help raise cash for the Cerebral Palsy Alliance, with the funds donated to a program to help those living with cerebral palsy find work.

“One of the biggest challenges and worries, which I know only too well as a parent of a teenager with cerebral palsy, is your child getting a job and career,” chairman of Starcom Mediavest Australia John Sintras said.

“Sadly, the reality is that almost 60% of people with a disability are unemployed, and nearly half live in or near poverty.”

The majority of the funding was secured from major media outlets donating advertising packages, which media buyers then sell to their clients at full cost.

CEO of the Cerebral Palsy Alliance Rob White said the record amount raised would make an immeasurable difference to the lives of those living with cerebral palsy.

“We are absolutely thrilled with the generosity of the business community,” he said.

“The difference this will make to people with cerebral palsy and their families is huge. It's a great example of what can be achieved when people work together”.