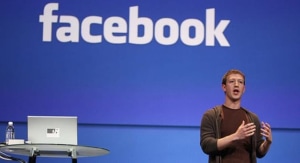 Facebook has today reported US$7.01 billion in revenue for quarter three, beating analysts expectations of how much money it can make from advertising. Of the total revenue, $6bn came from advertising, marking a 59% year on year increase.

Mobile accounted for 84% of Facebook's ad revenue in the quarter, up from 78% a year before.
The site is also claiming a 17% rise in daily active users to 1.8 billion people logging in to the site on a daily basis, 1.1 billion of those doing so on mobile.

Facebook's Q3 financial update comes as Warc releases its global ad spend forecast for 2017 – and it's not looking as great as Facebook's report card.

Warc's numbers show global ad spend will slow down next year, to 4.2%, down from 4.5% in 2016. In September Zenith upgraded its global forecast following stronger than expected ad spend in the US.

Australia's ad spend growth is sitting below the global figure at 3.8%, but it will remain flat next year, according to the forecast.

All major mainstream media channels are expected to record growth in 2017 – with the exception of magazines and newspapers.

TV is expected to see growth of 1.1% globally, while online advertising is well into the double digits with 13% growth expected, although both register a slow down.

Mobile too, will see a slowdown in growth, but it is still expected to be the fasted-growing channel in 2017 with 34% growth forecast.

Eight of the 13 markets coovered will see softer growth rates in 2017.

India is the fasted growing market with 13% ad spend growth expected, while the US market is seeing a boost from election spending and the Olympics resulting in a 5.1% growth in 2016, which will soften to 2.8% growth in 2017.

Brexit does not appear to be having a major impact on ad spending in the UK with above global average growth expected this year and into 2017, although it is expected to dip from 5.6% growth to 4.8%.

James McDonald, senior research analyst at Warc, says: "The latest consensus results present a positive outlook for advertising investment at both a global and local level. All 13 markets studied are expected to record ad spend growth in the short term, and this despite their contrasting socio-economic environments.

"We have identified a common trend among more mature markets whereby increasing investment in internet - particularly mobile - ad formats is driving headline growth. Applying consensus trends to Warc's adspend data shows that mobile will grow to be the world's third-largest ad channel by the end of 2016."