Get under the skin of TAC's 'Graham Project'

Check out the Aussie work shortlisted at Cannes Lions 2017 here.

Transport Accident Commission (TAC) is no stranger to 'shock and awe' in advertising. The past 25 years of its road safety ads have included graphic images of crashes and accidents, designed to jolt the public into behaving better on Victoria's roads. But, for its new goal, a future free of deaths and serious injuries on roads under the Toward Zero banner, TAC and agency Clemenger BBDO Melbourne, needed to take a different tack.

The result is 'Project Graham', a sculpture-turned-conversation piece designed to show how human beings would need to evolve if bodies were built to survive a low impact crash. Using the expertise of artist Patricia Piccinini, crash investigation expert David Logan and trauma surgeon Christian Kenfield, Clemenger and TAC designed Graham to be an exploratory tool for the public to engage and discuss.

Graham is touring around the state as part of an educational exhibition and school curriculums have been developed alongside it for school groups. It also forms the basis of video content and more traditional ads, but the educational aspect is at the core.

“An underlying part of the Toward Zero philosophy is that we've moved from the idea of blaming people because the majority of the community do the right thing,” TAC senior manager of road safety Samantha Cockfield said. The campaign is one of the first in Australia to use Google Tango, a 3D mapping and augmented reality tool, that lets visitors to the exhibition explore beneath Graham’s skin, to understand the reasons behind the way he has evolved. Interest in Graham has been global. There have been countless news articles and social media posts along with 10.4 million page views on its web hub in the week after the launch.

“We initially briefed this idea as a mass media campaign. During the market research phase we had a range of TV scripts developed and we realised a 30- to 60-second TV ad was not going to get the complexity of this issue across to the community.

I still remember the day the idea for Graham was presented to me – I thought this will work, because it was so simple. The issue for us was if it wasn't a traditional mass media campaign, could we get enough eyes on it?

But, we just had to believe in the brilliance of the idea. There were a lot of tense moments in terms of being a government client, but the idea was so good, we couldn’t not go there.”

What the Agency says:

“We realised what we needed to create was something that had as much impact as the shock ads that TAC did before, but that allowed a conversation.

We decided if we got everyone to question their vulnerability, that was probably the best starting point and that’s why creating Graham felt like the best jolt to get us there.

We knew early on it had to be more than a sculpture, so we made sure we were exploring the best ways to communicate what was underneath his skin from the get-go. That’s where Google Tango comes in and that’s why he tours.” 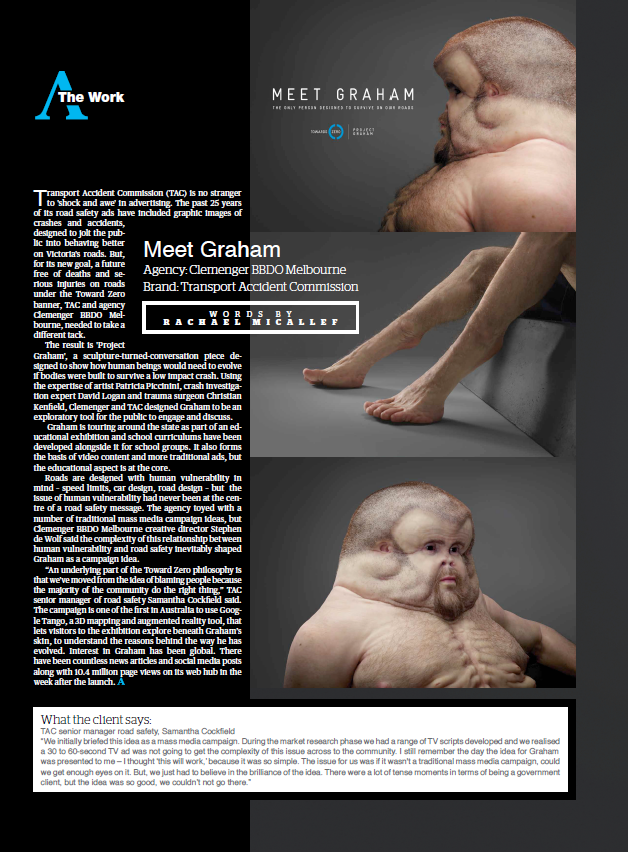 To read the full article download a digital version of AdNews on desktop, Apple or Android here for $5.99. You can also subscribe to the premium print edition here.