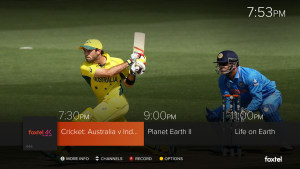 Foxtel CEO Patrick Delany hasn't ruled out the possibility of 4K resolution streaming across any of its platforms as it prepares to launch its first, dedicated 4K channel.

During an event hosted by Foxtel today, the pay TV boss stated this would be a first for the Australian market, guaranteeing an uninterrupted 4K service, shooting down streaming competitors Netflix and Stan, and their "inconsistent offerings".

"They have had 4K options at their servers, but whether consumers get that 4K is another issue, secondly the pickings are very thin and never has it been in live sport or any other live content," he says.

"You don't need the internet to get it, we can promise it and we will continue to build out our content with more and more 4K."

The company also announced the new IQ4 set-top box, which will be required to access the 4K channel.

Foxtel would not reveal the pricing structure for the new service but stated it would vary based on the type of Foxtel customer, with Delany stating that the company would be "rewarding loyalty to the company" and that it wasn't a "dramatic" increase.

Foxtel in 4K will launch in October on channel 444 and will come as part of a Foxtel Platinum HD or Foxtel Sports HD subscription for customers with an iQ4.

The service also arrives in time for the 4 November Australia v. South Africa Cricket ODI, which will kick off Foxtel’s sports coverage in 4K, something the company will rely on heavily in its early stages.

Delany highlighted that it would continue to push for greater content, as it looks to expand the amount it offers over time.

There was no confirmation on whether Foxtel would rapidly launch a second channel but Delany added it would not be "stagnant" in its approach to the new service.

"It'll be cricket like never before, every ball, of ever over in Australian prime cricket will be in one place on Fox Cricket and is now going to be in 4K," he says

"Clearly we are famous for our sport but the three things that will really sting on this are movies, live sport and documentaries, but don't underestimate live concerts and other entertainment content."

Delany says movies will most likely be the next area of focus for the channel after sport. Selected Rugby League games will also be in 4K, but not every game, as newer cameras will be required to ensure each game can be broadcast to the highest resolution.

Asked by AdNews whether the service would be ad-free, Delany stated that he and the team "hadn't considered it" and that advertising was not currently being contemplated, stating if it was introduced it would most likely be based on the genre or type of content.

Not ruling out that the new service was a play to attract further premium consumers, Delany would not reveal if there was a target number of subscribers Foxtel were looking to reach.

"We would always like to grow but our strategy for this is to strengthen and maintain our current customers while growing our offering into other areas."