Foxtel partners with Netflix, as 'on demand' interface launches 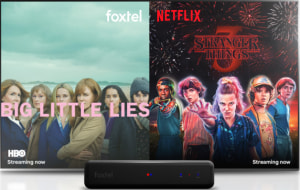 Foxtel has partnered with Netflix to integrate the streaming platform into its set-top box technology, as the pay-TV provider ramps up investment in its "On Demand" strategy.

Foxtel today unveiled a new user interface for its On-Demand' service, giving users an enhanced "tile and rail" system, similar to what it currently uses for its video on demand platform, Foxtel Now.

The new software, which will be rolled out to Foxtel's one million users up until November this year, launched to a select 50,000 Foxtel customers.

As part of the deal with Netflix, Foxtel will seamlessly allow those with the new software to swap in between the local cable platfiorm and the US-based streaming giant's content.

Personalised recommendations for customers based on their viewing history will also be introduced, with Foxtel saying it hopes to do the same with Netflix over time.

SBS On Demand will also arrive as part of the "New Foxtel Experience" in the coming months.

Foxtel CEO Patrick Delanysays the move is the latest step in Foxtel’s continued aggregation of the "best content and streaming services" for customers to view on demand.

"This all goes back to the basics of what Foxtel is, which is an aggregator. We need to consider its customers first if we want to retain them, so if we're already partnered with the like of the BBC and National Geographic, why wouldn't we partner with streaming services," Delany told AdNews.

"For something like Netflix, which is by far Australia's most popular streaming service and with the complementarity between both of our content libraries, it seemed like a no-brainer to be the first one."

Delany says this was an example of how Foxtel was separating itself from the free-to-air networks, which had now shifted focus toward "live and local" programming and moved specifically away from "niche drama".

He says partnering with Netflix would only strengthen Foxtel's goal of "serving masses through niches", a strategy which he believes the two share based on their content offerings.

"There's no doubt live TV channels for different audiences and content providers will be very popular. Look at Apple trying to move into that now but we remain focused on delivering both on the most accessible platform possible," Delany says.

"Our view is most of Australia think of Foxtel as being about live channels and its electronic program guide. That's something we need to change as a point of view and Netflix certainly gives us a better means to achieve that."

Delany added that the strategy was also based on customer retention over aggressive acquisition.

Recently-appointed MCN chief sales officer David Roddick also told AdNews that while pre-roll advertising won't be introduced at the launch of the new software, the sales house will "certainly explore" every avenue as it the interface is made available in the coming months.

"All of the product set is under review and the ad formatting will constantly evolve as the platform beds in and this throws up a whole raft of new advertising opportunities that we will work with Foxtel team to develop," Roddick says.

"It will be true to our positioning. People are paying for this platform and therefore they'll expect a superior ad experience and that will, in turn, reflect a better advertiser experience."

Roddick says there will still be lower ad loads, as previously outlined by MCN, as well as a "less invasive" strategy when it comes to its six-second ads and pre-roll for on-demand content.

Both Delany and Roddick did not rule out advertising within the new Foxtel On Demand interface, entertaining the possibility of having ads placed in between "content tiles" similar to banner advertising seen on websites.

However, both reinforced that it was not the job of Foxtel to "overburden" users with advertising, based on the product's premium nature.

As part of the Foxtel and Netflix deal, certain packages will include six months of Netflix free.