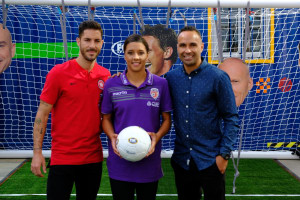 Fox Sports will show more women’s football and is targeting younger fans to grow viewership across its A-League coverage.

Fox Sports has secured five official partners for the season, including Hyundai, Harvey Norman, NAB and McDonald's and new sponsor Bet365. There are also two short-term sponsors, EA Games (from October to December) and Movember (October to November).

Director of marketing and communications Carly Loader tells AdNews partners are able to leverage the A-League and W-League across TV and digital platforms, and while most limited advertising spots have sold out there are still some available.

The biggest change to this season's domestic football line-up is the expansion of W-League coverage with 27 live games this season, up from 17.

Interest in women's football is at an all-time high due to the meteoric rise of the Matildas in the past year, who have beaten several top nations and loom as genuine FIFA World Cup chance.

“Anyone who watched the Matildas play in Penrith and Newcastle against Brazil would understand why we're increasing the women's league coverage,” Fox Sports head of television Steve Crawley tells AdNews.

“Sam Kerr is probably the best footballer in the country. It's so exciting to watch a world class outfit like that, the W-League has gone from 17 games to 27 games, but I wish it could go to 37 games.”

Last season, Fox Sports reported an 11% year-on-year increase in the TV viewers across the A-League season, but support for the domestic leagues falls well short of 1.1 million registered players.

“The secret to sport is getting the kids involved and the younger audiences involved,” Crawley says. “That's the great thing about football, it's got the highest participation of any sport in the country, there's more kids available so that's why I wouldn't be surprised if we grew it by another 11%.”

To help promote the game, Fox Sports is focusing marketing efforts on a handful of A-League and W-League star players that it hopes to turn into household names.

Two familiar faces that will feature prominently throughout the season are Socceroos great Tim Cahill and Matildas star striker Sam Kerr, who have both signed on as Fox Sports ambassadors.

Another way Fox Sports hopes to promote the game is by working in partnership with Network Ten to simulcast a three-hour block of A-League football each Saturday night on secondary channel One. This includes one match and Back Page LIVE with Tony Squires and Kelli Underwood.