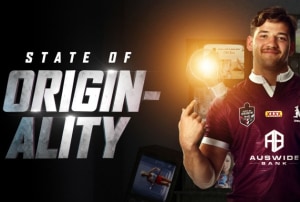 Nine unveiled the competition at last year’s Upfronts with more than $1 million in advertising inventory up for grabs across Nine’s leading television, radio, digital and print assets.

The latest campaigns: MenuLog for their campaign #OriginSnackdowns by McCann and UM; ResMed’s State of Origin Campaign 2021 by Magnum & Co and Taska Media; Four N Twenty’s campaign “We were there” by BWM Dentsu Melbourne and X; Anaconda’s Fish of Origin by Anaconda, The Post Works and Radium Design; and BWS’s Before Convenience by M&C Saatchi and Carat.

In each round of State of Origin, Nine will unveil new entries for the competition, with campaigns by SA Tourism, McDonald’s, Google and Bundaberg among the entries announced in Round 1.

When the final list of entries is unveiled at the end of State of Origin Game 3, Nine will open a public judging component, with 20% of the voting going to votes cast via the Wide World of Sports website.

Campaign name: We Were There