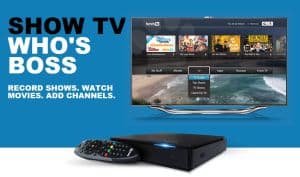 TV networks and the media industry are awaiting the launch of Netflix in Australia and the industry has been preoccupied by the impact of streaming services on TV, but FetchTV boss Scott Lorson believes everyone is missing the point.

In pumping up awareness around Fetch TV, CEO Scott Lorson said although the industry is focussing attention on the influx of streaming platforms like Netflix and their impact on the TV networks, the bigger picture is what Scott calls the "broadband war" that's about to erupt and the role of bundling phone, internet and IPTV about to be brought in by the telcos and how that will impact market share.

As Freeview Plus, a internet connected hybrid set-top box is set to launch in September and Foxtel prepares to roll out its bundled TV, broadband and phone packages in partnership with Telstra, FetchTV is aiming to position itself as “the only viable alternative” to paying for subscription TV through Foxtel.

Triple play – the bundling of entertainment, internet and phone services to households - is the only way phone and broadband providers in Australia can grow in a saturated market, said Lorson.

“The winner is whoever wins the living room and the bundle, and the telco broadband battle will be won with entertainment,” he claimed, adding that over the top services like Netflix and Quickflix are in a different space and are not the real battle on the horizon for TV networks and Foxtel, which is expected to roll out triple play later this year.

“It’s as if the media and analysts are at Wimbledon’s Court Three when the big match is being played on Centre Court," he said.

Foxtel reported last week that subscriber numbers had increased 5.6% to 2.6 million households. That’s around 27% of the Australian market. That leaves 6.2 million Australian households without Foxtel. Of the remaining 5 million English speaking households, Lorson claims half have previously had Foxtel and have got rid of the service, and the other half haven’t seen enough value to pay for it in the last 20 years so are unlikely to change.

This is why bundling is the answer and will be the key to FetchTV’s growth. Its “coalition” approach partnering with and being bundled in with a triple play offer from Optus or iiNet, means FetchTV will win growth, as well as from offering an alternative to Foxtel, he said.

Although Lorson claims FetchTV's parent company Astro spends more on content than Foxtel because of its reach into the APAC region, FetchTV isn’t just making a content play – but a platform play. It brings together free to air stations, catch up apps and subscription services, online video platforms like YouTube and other devices like hard drives into one ecosystem that can be controlled by one remote with a single interface.

Lorson says it’s not in competition with the TV networks who want to drive traffic to their own catch-up apps like Jump In or Go! Because it doesn’t interfere with the ad model and isn't competing for ad dollars.

“We’re a natural ally to the networks we don’t want to disintermediate them, but augment what they offer,” he said.

Fetch TV takes no direct advertising but replicates the ads from standalone services, so all the ads that would be served on Seven’s Jump In app are also served via the same content access on Fetch.

In a market cluttered with competing digital viewing platforms ranging from free-to-air catch up apps, to Foxtel’s paid subscription service and additional online paid for streaming products, educating the market about what Fetch TV offers is its first, second and third biggest challenge.

FetchTV launched its first brand campaign in February and in combination with ISP partners has ploughed $10 million into marketing. Lorson said the investment will continue with the roll out of 170 kiosks that demonstrate the platform at Harvey Norman stores.