Farmer Wants a Wife launches to more than 800,000 metro viewers 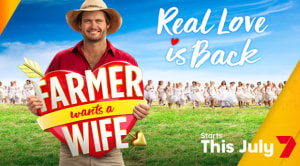 Seven’s Farmer Wants a Wife has returned to more than 800,000 metro viewers.

The reality dating show launched last night at 7 o'clock with 820,000 metro viewers tuning in for total people, according to OzTam figures, making it the most-watched entertainment program for the night.

Seven News was the most watched program for the night with 1.187 million metro viewers.