Fairfax 'the Germany of media' after rout of ZenithOptimedia 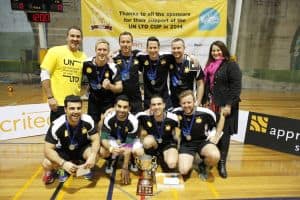 The all-conquering Fairfax side.

Fairfax took home the media industry World Cup on Friday, smashing five past a spirited but ultimately outclassed ZenithOptimedia/Razorfish side in the final.

The result could have been so different had not UM thrown away a two goal lead against the eventual champions half an hour earlier.

The AppNexus stadium (AKA the King George V sports centre in the Rocks) played host to what many commentators believe was the best, most fiercely contested UN LTD Cup in at least two years.

Reigning champions Mi9 were taken apart by the Fairfax side at the quarter final stage, although a second Mi9 side made it to the semi final stage and at one-nil up had one foot in the final, before ZO-Razorfish hit a winner 37 seconds from time.

In the other semi final UM hit two counter-attacking first half goals, leaving Fairfax with a mountain to climb. The team duly climbed it, hitting three in the second half, the last with a minute to go.

That set the stage for a mouthwatering final. The first half was tight, cagey, both sides realising what was at stake. The breakthrough came two minutes before half time with a screamer to the top left.

The breakthrough led to an almost Brazil-like capitulation from the ZO-R side. Seconds later Fairfax were two-nil up after tricky footwork from the number eight led to a free kick, which though blocked, bobbled away to be slapped home from two yards. Forty seconds later it was three-nil.

The second half mirrored the first, with ZO-R regrouping and keeping it tight until the fourth goal inevitably arrived with two minutes to go. A minute later Fairfax's number nine made it five-nil, beating two players with a mazy run and blasting on the turn into the top corner.

Celebs including Rhys Wesser, Alex Pullin, Timomatic, Frank Puletua and Luke Ricketson turned out and gave a scratch five a good game before capitulating at the end.

Fairfax's Nino Fragassi rightly claimed Player of the Tournament award, with the Golden Boot award given to Kurt Johnson from Mi9 White.

After the final, players and spectators alike made the short trip to the Australian Hotel, where The Daily Mail Australia provided isotonic refreshment.