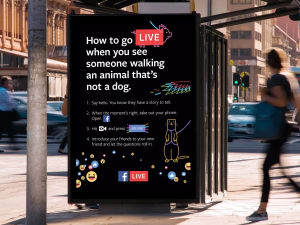 The ad push, which is set to roll out in two stages according to AdWeek, was created by Facebook's in-house creative team, The Factory, and shows videos made by real Facebook users. The campaign is designed to familiarise people with the live offering.

Regarding Live, the social media giant has previously said: “With Facebook Live you can use your phone to share a moment instantly with the people you care about. This means your friends, family or fans can be there with you, and you can respond to their comments and see their reactions.”

The first stage of the ad push, in which all content was shot using Facebook Live on a phone, is about 'awareness', and short Facebook Live snippets will run on TVC and on Facebook. In the US it's also thought there will be digital billboard creative.

Despite other media touting this as a global ad roll-out, AdNews can confirm that it will not appear in Australia, just the US and the UK.

In a previous Facebook blog, it said: “Parents are using it to share moments in their kids’ lives with their extended families. Athletes are giving people a window into their training. Chefs are bringing their fans into their kitchen. Journalists are hosting global conversations on topics they care about. Aspiring musicians can now put on a live concert for their friends. Many people all over the world are using Facebook Live in many different ways to talk to and interact with the people that matter most to them.”

The second phase of the campaign involves a more 'tutorial phase', aimed at showing people how to use Live.

Check out the tutorial: