Facebook has begun testing labels that indicate a news source is legitimate and has found it creates a small lift in user engagement.

In the US, Facebook has allowed a group of local and national publishers to run ‘Breaking news’ labels on specific content.

Although the tag doesn’t have any impact on how Facebook’s algorithm ranks news feed content, it has resulted in a 4% lift in clickthrough rate, a 7% lift in likes, a 4% lift in comments and a 11% lift in shares.

The concept is now being trialed with Australian publishers, include News.com.au, Seven News, Nine News, the Sydney Morning Herald and ABC News.

Facebook is also trying a new ‘storylines’ feature with ABC News and the Sydney Morning Herald.

Storylines allows people to opt in to follow a developing story when they first see an update in their news feed.

This alerting mechanism allows users to follow news in a chronological order, like how the news feed was initially designed, rather than being chosen by an algorithm. 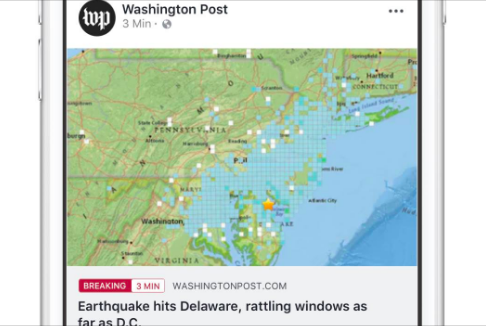 The 'Breaking News' function is now being tested in Australia

Subscriptions Test: Last year, we began testing new ways to support publishers' subscriptions models in Instant Articles. Based on publisher feedback, we built the product so that publishers have full control of the customer relationship, from processing the payment to keeping 100% of the revenue. That test has proved successful. In May, across all publishers in the test, people who saw Instant Articles were 17% more likely to purchase a subscription directly via Facebook compared to people who saw standard mobile web articles

Audience Network: This is the ad network that Facebook runs across the mobile web and across mobile applications for third parties. Audience Network helps publishers monetise and create engaging ad experiences that are right for their readers. Through a combination of access to Facebook advertisers and marketing insights, publishers can drive ad revenue and sustainable value for their business, and driving better results for advertisers. Facebook Audience Network.

Ad Breaks: ad breaks in video recently rolled out globally. It includes both mid-roll and pre-roll formats as well as image ads directly below the video – and whenever an Ad Break is shown the publisher or creator earns a share of the resulting revenue.