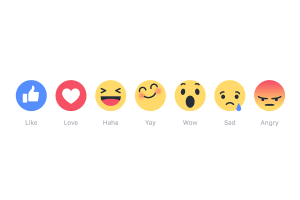 Facebook has announced its long awaited ‘Reactions’ tool will be available globally from today, giving users new ways to interact with conversations on the platform.

The new buttons appear as emoji – called ‘love’, ‘haha’, ‘wow’, ‘sad’, 'yay' and ‘angry - that pop up when the ‘like’ button is held on mobile devise. Counts for the reach of each reaction type will be shown toward the bottom of the post.

Facebook product manager Sami Krug says the changes have been the result of consumer demand.

“We’ve been listening to people and know that there should be more ways to easily and quickly express how something you see in news feed makes you feel,” Krug says.

The potential biggest impact for marketers will be how ‘Reactions’ impact on the feed.

Krug says at the present different emotions won’t cause the Facebook algorithm to show content in a different way but says the weighting of emotions will change over time.

“In the beginning, it won’t matter is someone likes, “wows” or “sads” a post – we will initially use any Reaction similar to a Like to infer that you want to see more of that type of content,” Krug says.

“Over time we hope to learn how the different Reactions should be weighted differently by news feeds to do a better job of showing everyone the stories they most want to see.

“We see this as an opportunity for businesses and publishers to better understand how people are responding to their content on Facebook.”

The new 'Reactions' functionality has been teased by Facebook for some time, with CEO Mark Zuckerberg confirming in September last year that it had been testing the tool in some markets.

The other impact for marketers will be the impact of knowing exactly how people feel about their posts – from loving something to feeling angry over it.

In September last year, AdNews asked the industry their view on the impending launch of reactions, with most seeing the benefit in knowing how their target market feels.

"With this potential new functionality being introduced that will be an opportunity for brands to put themselves out there to get feedback, warts and all.

"All this is down to Facebook making their feedback circle more rounded and I think that's important for brands."

G Squared co-founder and campaign director, George Pappas, agreed but noted it does come with risk.

“Adding new ways to engage with content pieces is a positive for brands,” Pappas said. “It's an opportunity to further personify and humanise a brand's voice.

“It could, however, lead to content hijacking if used negatively and not empathetically.”