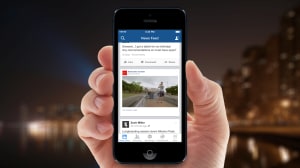 When Facebook launched Premium Video Ads in Australia in May there were no results, even from the US where the ads rolled out earlier, to show advertisers what they could achieve. There were concerns autoplay would turn users off, rumoured to be one of the main reason that Facebook repeatedly delayed the launch of video ads.

McDonald’s was the first brand in Australia to use Facebook’s Premium Video Ads format. Queensland Tourism was the first travel and tourism client globally to adopt it. Both brands say the activity exceeded expectations and, via Facebook, have shared the results with AdNews.

Accodrding to Facebook's own data, most people watched McDonald’s 15-second ad all the way through. According to Nielsen’s Brand Effect metrics it reached 2.4 million people and achieved a 3-point lift in brand consideration. Tourism Queensland saw similar completion rates and achieved a 13-point lift.

Facebook bills its Premium Video Ads spots as the equivalent of a hero TV spot and the placement is part of Facebook’s efforts to have its platform seen both as a complement to TV, and to take TV dollars.

It shaped the pricing and measurement around both digital and broadcast influences and is talking in TARPS not CPMs – something Ellie Rogers, head of agency sales at Facebook, said is is to give advertisers as much comfort around the new ad product as possible and help talk the same language.

One thing that held advertisers back from jumping on the platform immediately is the challenge in where the budget comes from – is it TV or digital? That’s the question Ian Laurie, head of social investment at UM’s Society social division, which managed the campaign for Tourism Queensland, is asking.

All parties are finding the issue a struggle which highlights the need for industry to figure out a single unit of currency that works across channels. Something the IAB will be hoping to address in part with its ongoing tender process for a new digital measurement.

Facebook's Ellie Rogers said that in a lot of its conversations with agencies and clients, it's the digital team asking for TARPS and the TV teams asking for measurement in CPM, which she says “goes to show how much the market is converging”.

Chris Chambers, director of digital marketing at Tourism Queensland, said the only way his digital and TV people could talk about the same thing was to talk in terms of views and audiences, rather than TARPS and CPMs.

Roisin Thanisch, interactive director at OMD, which handled the McDonald's campaign, said that the agency wasn't entirely sure how to convert TARPS on terms of Facebook video ads. That left a gap in terms of figuring out how the numbers relate wach other. “It highlighted the fact that there's more need for the industry to move towards a more ubiquitous unit,” she said.

In terms of pricing, Rogers says it was set by looking across both broadcast and digital channels with cost per audience, “the new CPA in town” in mind. There is no rate card set for Premium Video Ads because Facebook wants to measure it “in line with the market”. But as the format proves itself, prices will rise, she added.

“What we see with TV is that it’s mature and sophisticated, but the digital world is extremely volatile so we’re trying to balance the two,” she said. “What we’re hearing is that it’s pretty cost-effective and that we’re below par.”

Tourism Queensland, like many organisations, is turning to more video content and is looking for ways to distribute that content cost-effectively. That’s what made the new video product from Facebook appealing. Ahead of launch, advertisers were particularly interested in how Facebook’s video ads shape up against other video platforms such as YouTube.

McDonald’s premium video campaign achieved a 10 cent cost per view, but Thanisch, said it’s difficult compare because it hadn’t had content of the same standard running on Facebook before.

Tourism Queensland said the cost per engagement across its campaign was $1 with cost per view of the premium video ads sitting at 11 cents. It also saw a 12-point uplift in consideration that Chambers, says is high for both the organisation and the travel category.

Chambers said it has yet to do the direct comparison between cost per view on Facebook video and YouTube activity, but suggests both offer something different, citing the ability to target influencers and ‘friends of friends’ on Facebook as a benefit.

Thanisch added the cost efficiency and impact of using Premium Video Ads comes in combination with other ad placements across the platform. McDonald’s used the interaction with its premium ads on day one of the World Cup to create customer audiences it could later reach with targeted content.

“Facebook premium video is shifting the objectives,” said Thanisch. “Online video used to be just brand awareness and broadcast, now we’re seeing it shift further down to the pointy end of the funnel. You can tailor it specifically to reach more people who are likely to convert.”

Facebook's Premium Video Ads opens up a much bigger pool of online video inventory and the social media platform expects to see significantly bigger take-up from brands and agencies as the year comes to a close – particularly around what Rogers calls “pillar moments” like the Melbourne Cup, Spring Carnival and Christmas.

“Around those big pillar moments people are more likely to be 'thumb friendly' with it," said Rogers. "Those are those big moments that will work for it,” she said.

The other consideration is the content. Both McDonald's and Tourism Queensland used existing content. Rogers says adapting TV campaigns works, but OMD's Thanisch says local agencies need to think about including it in the original creative brief so that if Facebook Video is an option, the right kind of content is created.

“There needs to be more understanding that this creative content should be coming from local agencies and brands. We're still a little bit stuck in the idea that content is the 30 second TVC. Facebook is creating a new standard for creative agencies locally," she said. That should, she reckoned,  "get them shifting their mindset away from a TVC."

This story is an extended version of an article first published in the 22 August AdNews print edition, out now in print and iPad editions.