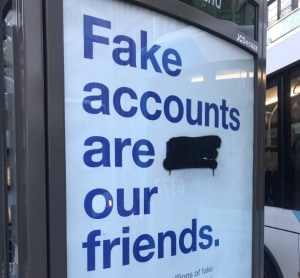 Facebook has fallen victim to the work of vandals in Sydney, who have targeted the social media platform's recent apology campaign.

Some out of home bus stops and signs have had the word 'not' spray-painted over them, changing signs to read, "fake accounts are our friends" and "fake news is our friend".

The OOH campaign, which appears across JCDecaux outdoor assets, is part of Facebook's major advertising campaign across Australia, launched in an attempt to reassure users that the platform can be trusted and will do better.

A spokesperson from JCDecaux told AdNews that it was aware of the vandalism and was moving to resolve the issue.

“Yes we are [aware of the situation], we noticed it first thing this morning and have been actively removing it since," they said.

"We will continue to monitor the situation to ensure any other activity is picked up and removed ASAP.

"In these instances we deal with fixing problems like these with absolute priority. Being in the public domain it is unfortunate, but a fact of life, we have to tackle issues like this.”

OOH is not the first medium to be subject to scrutiny since the launch of the campaign, earlier this week, Facebook was forced to amend its TV adverts by removing the term 'fake news', following outcry from Free TV Australia.