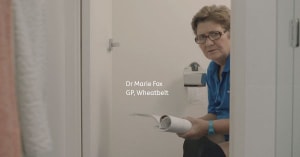 Facebook and The Cancer Council have found themselves in a war of words, after the social media platform blocked the charity's recent "Find Cancer Early" campaign.

The social media platform banned the ads, which warn people about the signs of bowel cancer, because the ads feature phrases with personal attribution, such as "blood in your poo?" and "bloody poo?".

Media Watch host Paul Barry criticised Facebook this week on the ABC program, calling the decision a "mistake" with 4100 Australians dying of bowel cancer in 2017.

Cancer Council WA research and education services manager Cassandra Clayforth tells AdNews the organisation was finding it difficult to get its health messages past the policy.

"We have tried two or three times now with the wording and it keeps getting knocked back. Perhaps in this case they could relax the policy a little bit," she says.

"We will just have to continue to try all different wording to see if we can get something through that doesn't get knocked back."

Clayforth says the organisation has been trying to deal with the situation but is finding it difficult to get in touch with Facebook directly.

A Facebook spokesperson refuted claims from The Cancer Council that it blocked ads simply because they referenced poo.

Instead, Facebook found problem with the questions asked in the ads and said its policy doesn't allow for users to be "criticised or attacked" over attributes such as medical condition, race or religion.

“We are glad that the Cancer Council is using Facebook to help them raise awareness and spread important health-related message," a spokesperson said.

"Language like “Are you fat?”, "If you are in debt" and “is there blood in your pee?” can feel very personal and negative, especially in the setting of your personal News Feed; and that is not what these ads are trying to achieve. We hope that the Cancer Council will consider tweaking the language and continue using Facebook for their important work.”

Clayforth said the online and radio ads will be complemented by a TV ad featuring country WA doctors.