ESPN and the NFL expand rights deal in Australia and NZ 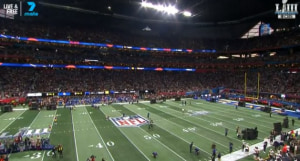 ESPN will also air all Thanksgiving Day games, all Postseason games (including Wild Card games, Divisional Round, Conference Championships), the Pro Bowl and the Super Bowl, resulting in an additional 36 games compared to the 2018/19 season.

The network will also launch a special NFL edition of SportsCenter Australia, hosted by Phil Murphy, Trevor Scales, and Mark Brown and airing immediately before Sunday Night Football, which will recap all the highlights from all the Sunday afternoon games.

The game will be called by ESPN Monday Night Football’s team of Joe Tessitore and Booger McFarland with Lisa Salters on the sidelines.

ESPN will have a digital linear simulcast of the live games via the ESPN app and affiliate streaming services.

“We’re thrilled to be expanding our NFL coverage and bringing fans more games than ever before. The appetite for NFL is growing, and with plenty of prominent Aussies in the NFL, Valentine Holmes, Lachlan Edwards, Mitch Wishnowsky, Adam Gotsis, there are so many great local stories to follow," ESPN ANZ general manager Haydn Arndt says.