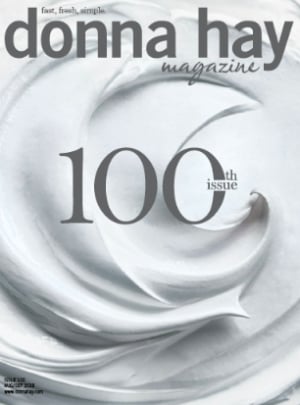 After 17 years in business the Donna Hay magazine is no more.

During an event in Sydney on Wednesday night to celebrate the 100th and final issue of the self-titled food magazine, Australian food stylist, author and magazine editor Donna Hay took to the stage to bid the magazine farewell.

The closure is a result of its split from its licensing agreement with News Corp.

Addressing more than 100 revellers gathered at the Surry Hills event for the annual cake and Champagne-filled party, Hay joked about how she was hadn’t learnt her speech and was “still winging it”, much like how she had started nearly two decades ago when she embarked upon her magazine journey.

“It was a dream come true 17 years ago. To be given my own magazine with eight full-time staff; a kind of makeshift studio/kitchen sort of office and away we went.

“When I look back, it was kind of like boarding a train without looking at any of the signs on the platform; surrounding myself with some likeminded people and taking off on a journey - and what a journey it’s been.

“It’s been an incredible ride and a 100 years for me seems like a perfect time for the train to stop.”

While the publication is no more, Hay insists the magazine was "not broken", there's still a demand for high-quality creative print and that a subscriber-only model "something print" is in the works. She also said it's time to "reinvent the way we publish".

Hay currently has two more cookbooks in the works and will still be heading up www.donnahay.com.au as a digital platform - “with lots in the pipeline” for that.

“I also have to thank all the advertisers and sponsors who have kept the magazine afloat,” she said.

“We couldn’t have done it without you so thank you so much for your continued support - especially Estée Lauder – from issue one to issue 100.”

Hay says she’s not sure what’s next but she leaves “no stone unturned in due diligence”.

“But what I do know, is I have to do something amazing, so whether it’s another magazine, or more beautiful content, time will tell.”

Followed by cheers, the high-spirited queen of cake made her way over to the cake table to slice up an array of sweet treats.

The 100th edition is still available to buy, but when you click to subscribe beyond the 100th issue, a message from Hay pops up (see below). 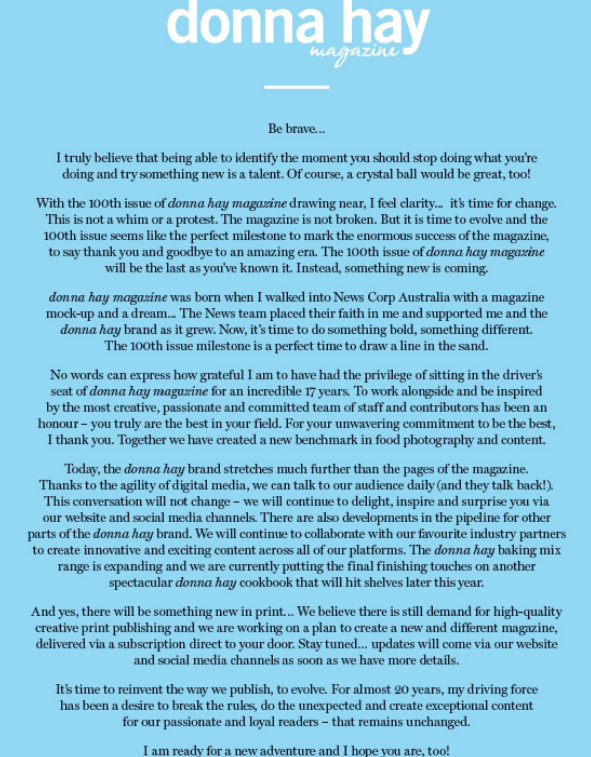 In 2015 Hay joined the Australian Magazine Awards Hall of Fame. Speaking to AdNews at the time, she said: “I wanted the magazine to be so beautiful and it didn’t occur to me that it would have my name on it. I was so worried about the ice cream and the little cup on the cover that I wasn't focused on everything else."

The rest was history. In that moment, Donna Hay stopped being an editor of other titles. She became a brand and a household name behind not just a magazine, but cookbooks, a homewares range and soon, a pop-up shop. Despite that, she said she never saw the brand as just her, but thought of it as a team.

“I know my place in the team, I know my job in the team. There’s really talented people in the team. The magazine just happens to have my name on it, but it’s a collective, it’s a brand. ‘Doing a Donna’ doesn’t mean me – they’re talking about us," she said.

Back then just three years ago, since launching her magazine in 2001, Hay had released 24 cookbooks, which sold more than four million copies worldwide that had been translated into nine languages, and was named as one of the ‘Magnificent Seven’ cookbook authors at the international Gourmand Awards.

The Donna Hay iPad app was also the number one selling digital magazine in Australia; she had her own television series and launched an e-store featuring many of her own products, including her collaborations with Royal Doulton.