Domino's lends a hand to all the real 'Karens' of Australia 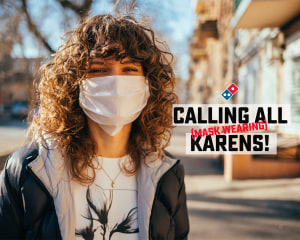 Domino's has launched a competition for 100 Australians named Karen to win free pizza.

For some time now, rude middle-aged women who wanted to speak to the manager had been dubbed "Karen" but now it has extended beyond that to other rude behaviours.

Now, the name is being associated across the internet with a vocal minority who believe rules and laws don’t apply to them.

Domino’s chief marketing officer ANZ Allan Collins says this prompted the pizza chain to lend a helping hand to all the law-abiding Australians out there named Karen.

“In 2020, 'Karen' is no longer content to speak to the manager. Now, she’s dobbing in her neighbours, refusing to quarantine, or wear a mask,” Collins says.

“Consequently, the name 'Karen' has become synonymous with anyone who is entitled, selfish and likes to complain. What used to be a light-hearted meme has become quite the insult to anyone actually named Karen.

“Well, today we’re taking the name Karen back. At Domino’s, we’re all about bringing people together and we want to celebrate all the great Karens out there by shouting them a free pizza!”

To enter the competition, anyone named Karen will need to upload photo ID confirming their name is, in fact, Karen, and tell Domino's in 250 words or less how they’re one of the ‘nice’ ones. Competition ends Friday July 31, 2020.