English Premier League (EPL) fans have taken to Twitter to express their outrage at Optus over poor coverage of the game.

The telco's airing of the highly-anticipated football season began on Sunday morning AEST time, but was met with fans claiming problems about the quality of the service. As a result it wasn't long before many took to social media to complain under the hashtag #OptusOut.

Issues included poor quality streams, delays behind the live game and coverage cutting out during play.

Optus picked up the EPL rights in a $180 million three-year deal from Foxtel at the tail end of 2015. It is happy to comment on the debut games, but the telco has refused to release viewing figures from the first round of the season.

While it seems the bulk of the problems were experienced on Sunday night, the hashtag was still in use as recently as this morning. 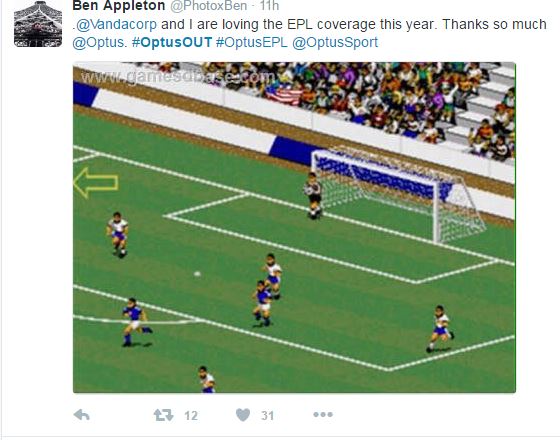 An Optus spokesperson told AdNews: "The feedback we have received about our first weekend of Premier League has been positive, but we recognise that individual experiences can vary, particularly over devices, browser interfaces, and networks.

"We recommend customers experiencing difficulties contact us directly via our social media channels or technical support which are staffed 24/7 for trouble shooting advice."

AdNews tuned in to watch games late on Sunday night and into the wee hours of Monday morning. There was an outage in the Bournmouth vs Manchester United game for about five minutes, while Liverpool's thrilling win over Arsenal was delivered glitch free.

The outage was not the result of an "individual experience" or device error, as claimed above, as Optus put up an apology graphic about technical difficulties.

Interestingly, the coverage included non-stop in-house advertising from the telco, a sign Optus has not yet secured advertising partners. Speaking to AdNews in July, head of TV and content Paul Rybicki said the telco had locked in a main sponsor for the broadcast.

Optus' imported matchday analysis program, which featured a presenter and punditry from Manchester United legends Rio Ferdinand and Peter Schmeichel, was "average and one-dimensional compared to more sophisticated offerings on Sky Sports in the UK", according to AdNews journalist Arvind Hickman.

Optus offers the EPL content package free to any customer who signed up to selected plans by 31 July and the service can be viewed across mobile, desktop or tablet, or streamed on television through Fetch TV and Apple TV.

For viewers wanting to watch the EPL on free to air, SBS has the rights to one live match each week, with its first game, Leicester City vs Hull City, airing on Saturday night.

According to SBS the coverage reached 423,000 viewers across both metro and regional.

"I’m delighted that we were able to do that again on Saturday; and we look forward to doing so every week of the season – with SBS set to deliver a weekly match of the Premier League live on SBS and HD."