By Sponsored by Carsales | Sponsored 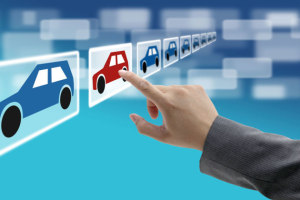 In the past four years, the path to purchase an automobile has shortened by 48 days, according to new research by Ipsos. This streamlined consumer journey, as well as an increasing propensity to lean on digital media at each phase of the process, is changing how marketers and media planners reach car buyers.

Consumers have slashed the amount of time they take moving from their shortlist of vehicles to closing the deal, with the process now taking just 21 days, down from 69 days in 2013. The whole consumer journey has shrunk from 4.3 months to 2.7 months.

They are also spending less time at car dealerships than ever before, visiting an average of just 1.8 times prior to collecting their new wheels compared to four visits last time the study was carried out in 2013.

In fact, Australians will soon be able to purchase a new car without setting foot in a dealership. Next year, leading car comparison and review site carsales will enable manufacturers to offer online buying of new vehicles, making it even quicker to buy a car.

This development correlates to increasing consumer confidence – powered by digital media. The Ipsos study found that 41% of consumers say they have confidence in completing their entire car purchase journey online today, with 57% indicating they can see it happening in the future. Only two out of 10 car buyers are unsure about online-only purchases and the 23% who lack confidence were more likely to be in the 55+ age bracket.

Since 2013, there has been a 70% increase in online shopping in Australia and buying a car online is an obvious extension of this trend given the huge volumes of information about cars online.

Digital media platforms like carsales have changed the game and turned the consumer journey on its head, reducing the time and effort it takes to research vehicles. It empowers buyers to control their own purchase journey, when previously that might not have been the case.

In Australia, digital consumption is up 4.4% year-on-year in 2016, while most of the traditional mediums have continued to decline: print consumption is down 8.6%, magazines are down 11.2% and broadcast TV is down 1%, according to figures by Zenith.

Gone are the days where car research involved wading through multiple media, such as newspaper auto classifieds and motoring sections, motoring magazines like the NRMA's Open Road, as well as spending weekend after weekend visiting multiple car dealerships.

Buyers say they feel more confident (see below) and empowered during the purchase journey, armed with more information at their fingertips.

“The auto industry is no different to any other industry out there in that we have time poor, information rich consumers out there, and that's driven by the amount of information that we have access to,” BMW Group Australia GM of marketing Stuart Jaffrey explains.

“If I go back to 2007, I would say the auto industry and BMW were still very much in that mindset of launch car, forget launch. We no longer operate like that. The marketing message has changed dramatically.”

GM Holden executive director of marketing Mark Harland says Australia has more car brands per capita and per vehicle than anywhere else in the world, making it truly a buyers’ market.

“There's upwards of 65 brands in Australia while America has only 50...Australians are now bombarded with choice,” he says.

Harland explains that in previous generations, choice might be limited to a few major brands and a visit to a dealership was often part of the discovery process.

“This has changed quite dramatically, all that shopping and research that used to happen in dealerships happens online,” Harland points out. “They know the dealership where they're going to purchase it from and they've pretty much done most of that work and are armed with an awful lot of information through digital and social channels.”

Another major manufacturer that has evolved how it reaches consumers is Toyota. Ally Cooney, head of digital at Toyota’s media agency The Media Store, says the once stressful process of buying a car from dealers has become stress-free as buyers have all the power.

“We’ve had to evolve with a customer that walks into a dealership these days who is really well equipped with what they’re after and what they have to pay. We are also dealing with so many more new entries to market,” Cooney explains.

“Our challenge is to get on the list of cars a customer is considering and to stay on that list.”

Toyota reaches potential customers through sponsorship and by nurturing relations across multiple touchpoints with digital compare and review sites a key partner.

At the top of the funnel Toyota invests heavily in sponsorship of major events, including the AFL, Olympics and Tamworth Country Music Festival to bring prospects closer to the brand.

Harland says it is important for automotive brands to invest across multiple channels, but even more crucial is trying to do things a bit differently to stand out.

“There is some white space in the market to do some things that are a little different,” Harland says. “The important thing there is making sure that we're doing things that not everyone else is doing.

“If I look at the majority - not everyone - but the majority of the SUV ads are really targeting males and are fairly proto-typical in their approach. Women are making those decisions and buying those vehicles and, as an industry, we're not talking to them. I think you can't just put all your bets in one media type either, so it can't just be all TV or switch it all to digital or Facebook or Google.”

The Ipsos study, commissioned by carsales, polled 675 consumers about what their key influences were during each stage of the purchase journey - including traditional media, digital media, people and activities.

In the initial landscape building stage, the top influencers were spouse/partner (47%), car review and comparison websites (39%) and search (33%). Buyers in this early phase are driven by emotional cues, such as inspiration and feeling.

Buyers in the 'validate' stage are looking to refine their choices with more rational thinking, influenced most by car review/comparison sites (52%) and dealer websites (48%), the study found.

The third 'Select' stage leans heavily on the influence of a spouse/partner (52%), car review/comparison sites (46%) and dealer websites (41%) with similar influences found in the final stage, ownership. 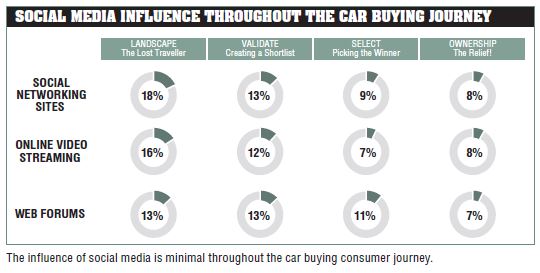 Auto marketers have been investing heavily in digital channels to try and reach car buyers throughout the consumer journey. In the past 10 years, automotive media spend in digital has grown by 450% to $230.3 million in FY17.

Car brands still invest heavily in television advertising ($341.5 million) although these budgets have only grown marginally compared to digital. By comparison, outdoor and radio media budgets have nearly doubled in the past 10 years, while there have been large declines in print advertising, a trend that is occurring across other sectors.

“If you took digital out, the overall splits probably haven't changed that dramatically,” Jaffrey points out. “As digital has grown, that budget has had to come from somewhere so some of those more traditional channels have come down to an extent to balance that out.”

The two digital channels that are attracting the largest investment from marketers are content sites, such as established car review/comparison websites, and search. The use of programmatic exchanges that help marketers better target consumers are also on the rise, albeit from a lower base.

“We aim to be where the fish are fishing, those big auto classifieds sites,” Cooney says. “How we work with those really important partners is key. We are more interested in content video – sight, sound motion is so powerful for our category…that is something we’re really focused on this year as part of our evolution of how we get Toyota in front of people at the right time that adds value.”

This Automotive Marketing Report was developed by AdNews in partnership with Carsales.com.au