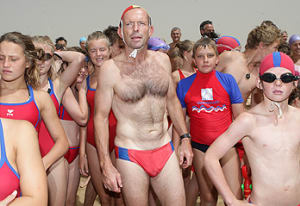 Could to ad from Bundaberg Rum pay a cheeky tribute to former PM Tony Abbott?

Diageo Australia has escaped censure by the Advertising Standards Bureau (ASB) after a complaint said its ad for Bundaberg Rum was exploitative and degrading to men.

The ad is part of Bundaberg Rum's $20 million brand refresh that aims to associate the brand with national Aussie pride.

The spot features a close up of a man in Speedos, a cheeky tribute to former PM Tony Abbott, accompanied by the headline 'No one does Prime Ministers like us and no one does Rum like us'.

"I also believe that it is a snide dig at former PM, Tony Abbott and his famous budgie smugglers. I may not like the man, but it is not right to ridicule anyone, as this advert clearly does."

In response, the advertiser defended the campaign saying that the advertisment did not use “sexual appeal in a manner that is considered both exploitative and degrading”.

While the ASB acknowledged that “some members of the community may be uncomfortable with an image of a man in speedos”, it chose to dismiss the case noting it “did not breach the code on other grounds”.

The ASB says: “The board considered that the advertisement did treat the issue of sex, sexuality and nudity with sensitivity to the relevant audience.

“The level of nudity is consistent with the wearing of swimwear and the placement of the text over the man’s groin means the level of detail is minimal and not inappropriate."