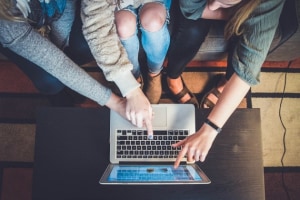 Traditional broadcasters are being forced to rethink their commercial revenue strategy as viewing shifts from free-to-air (FTA) linear television to BVOD.

Deloitte has released the 10th edition of its Media Consumer Survey of 2,000 people, drilling down into Australian digital entertainment audience preferences.

The separation of "free" broadcast viewing from paid viewing is becoming smaller as broadcasters and entertainment services look to move audiences more seamlessly between free and paid content, says Deloitte.

"With FTA TV maintaining its dominance in people’s lives and with its expansion into BVOD, there are plenty of opportunities to use this as a driver towards subscription and pay-per-view content to maximise value from audiences," says Deloitte.

But what about advertising?

Overall, almost half (47%) of respondents indicated they would be willing to view advertising in exchange for a 30% discount on their subscription.

Younger generations are particularly amenable, with 56% of Millennials and 54% of Gen Z willing to expose themselves to commercial messages compared to only 18% of matures.

This model is an evolution to the "freemium" offer of services such as Spotify, which offer ad-funded models as a free or cheaper alternative to an ad-free paid subscription version.

The way we watch is changing with matures (100%) and Boomers (95%) almost exclusively watching on a television.

"Free-to-air TV ads remain the strongest to influence buyer decisions, with 17% of respondents indicating they are highly likely to engage with advertising on television," says Deloitte.

"But as free-to-air viewing shifts from live television to BVOD on devices, particularly for younger generations, willingness to engage with advertisements may be a challenge."

Respondents were not enthusiastic about engaging with advertisements on smartphones (20%) or laptops (12%).

Younger generations are keener. Gen Z is most likely to engage with ads on smartphones (40%), compared to television (20%) and laptops (20%), and 15% of Gen Z indicated location-based mobile adverts influence them, compared to only 1% of Matures. 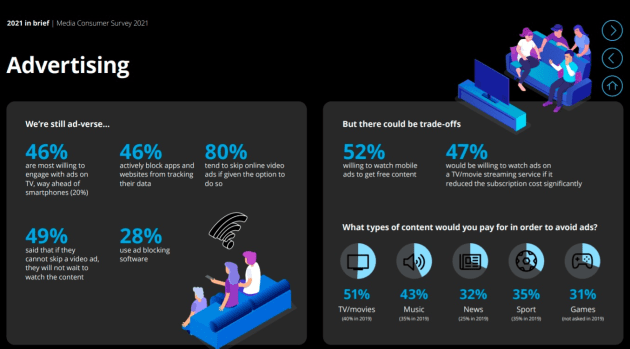 Deloitte says advertising revenue will continue to be a critical revenue stream for both individual services and entertainment ecosystems, providing a valuable supplement to subscriptions.

"And let’s not forget the power of ad-avoidance in driving audiences towards lucrative subscription revenue; for some particularly intolerant audiences, an ad-free alternative to an advertising-heavy offering may be the best subscription acquisition too," says Deloitte.