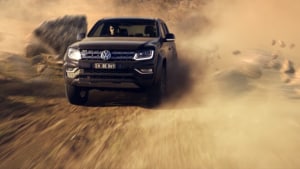 Volkswagen has brought back its controversial ad for the Amarok V6 model that was banned earlier in the year for promoting dangerous and reckless driving.

The new edit of the original video is "substantially censored", according to DDB, with various scenes cut out and replaced with a toy car executing the stunts deemed “too dangerous” to be shown on TV.

The campaign cheekily addresses the struggles Australian car manufacturers face when trying to portray the power behind their vehicles with the category heavily restricted.

Despite Volkswagen and DDB's best efforts, the ad was ultimately banned by the ad watchdog in October. The ruling garnered international attention with a debate kicking off on whether advertising standards in Australia were farcical or fair.

The updated version of the ad will begin re-airing from today and continues to use a fictitious advertising director who uses the toy truck and drawings to show off the power of the Amarok V6.

“We always knew we would be up against it trying to demonstrate the power of this ute. While we were confident in our original solution, we understand that with great power comes great responsibility, and we sincerely hope this further censored version of our commercial addresses any and all concerns," he said.

DDB Sydney creative partner Jade Manning added: “We’re really proud of the impact the ‘Too Powerful for TV’ campaign has had so far and we’re confident that this further censorship of the Amarok’s ability will still give Australians a sense of the power of this class-leading ute.”

DDB recently retained the creative for Volkswagen following a global review of the auto account.

The original ad that has been banned from TV: