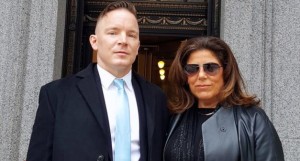 A judge has ruled that a US$20 million gay discrimination suit filed against DDB and Omnicom can proceed.

Just under two years ago, creative director Matthew Christiansen and his lawyer Susan Chana Lask filed suit against DDB and Omnicom, alleging sexual harassment and discrimination in the workplace.

The case was originally dismissed, but the dismissal has now been reversed, ruling in favour of Christiansen.

The claims specifically regarded former DDB chief digital officer Joe Cianciotto, who was Christiansen’s supervisor when the alleged harassment occurred between 2011 and 2013.

According to the complaint, which Lask later described in a LinkedIn post, Cianciotto began making fun of Christiansen for being gay and suggesting he is a HIV-positive man, directly after he came to work for DDB.

The LinkedIn post says Joe repeatedly asked a gay employee to describe gay sex, that he wanted to have gay sex with him and he accused a gay male of having sex with children then killing them in a cabin in the woods.

A drawing allegedly by Cianciotto

The filing claimed that Cianciotto “drew multiple sexually suggestive and explicit drawings of Christiansen on an office whiteboard” and “accused him of having AIDS” during a meeting.

Just over a year ago, US District Judge Katherine Polk Failla “reluctantly” ruled that the complaint held no merit because it amounted to an attempt to “squeeze the case into the sex stereotype theory", as reported by New York’s Gay City News.

Christiansen appealed and in the new filing it was ultimately reversed.

Omnicom’s argument in court essentially stated that, while the holding company believes discrimination based on sexual orientation should be included in the Title VII law, its absence renders Christiansen’s complaints invalid.

“While we believe the claims in this individual case are without merit, Omnicom supports any change to the applicable federal law that would extend protection to employees who experience harassment on the basis of sexual orientation," the holding company’s statement says.