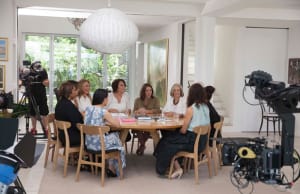 David Jones has released a ‘Women in Conversation’ content series in celebration of International Women’s Day. The inaugural series features roundtable discussions with a group of influential Australian women speaking candidly about the important issues relating to women in today’s society.

The topics of discussion include relationships, motherhood, gender equality, mental health and self-belief.

In one clip, Hush says: “Sometimes women are their own worst enemy. That's why, when you do have a really supportive bunch of girlfriends, there is something really powerful about that. There is a lot to be said for sticking together."

On social media, Turnbull added that one of the things that really worries her about social media is it has "unleashed a very low level of civility in the way people communicate and talk to people".

"I'd like to think that 10 years ago these people would never have said these things out loud," she says.

The aim of the content series is to start a conversation that taps into the psyche of diverse Australian women, exploring issues that matter most and discovering which inspire them.

David Jones general manager, marketing communications, Victoria Doidge, says: “The ‘Women in Conversation’ series was conceptualised in considering what International Women’s Day means to us, and what we can do to celebrate and inspire Australian women.

“We wanted to facilitate a forum for interesting and dynamic women to share their views and for this content to be shared to act as a catalyst for greater conversation on important topics relating to women.”

Women in Conversation’ is the first series to be released as part of the new content program ‘At the David Jones Table’. The series was created in collaboration with David Jones’ creative agency Whybin\TBWA and independent television production company McAvoy Media.

The four x 15 minute episodes can be accessed via the retailer’s website, YouTube and social media channels.