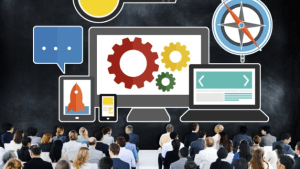 The capability for cross-platform measurement between digital video and television – creating an apples vs apples scenario – already exists, but where there is conjecture is how the industry should measure success.

It’s one of the discussion points at the IAB’s Measure Up conference in Sydney next week and has been plaguing the industry for several years now as advertising dollars shift away from television into new digital media platforms.

AdNews caught up with Nielsen’s global president of Watch (media) Megan Clarken and global SVP of product Jessica Hogue to find the lay of the land in the US, where there have been positive strides forward in cross-platform measurement.

The measurement company is working with advertisers and publishers to provide the architecture and capability for cross-platform measurement to exist as the industry grapples with standards and protocols on how measurement between platforms should be reconciled.

“If you have a TV asset that follows the rules of what is valid and viable for TV ratings and it’s aired on TV and streamed on digital platforms within seven days, it’s picked up by us and credited to TV ratings,” she explains.

“If you are digital first distributor like a YouTube TV or Hulu and follow the rules of what constitutes TV ratings, your digital program is included in the TV ratings today.”

Nielsen and its partners have developed a framework, methodology and the right tech to establish the comparability infrastructure and there is ongoing work on how this applies to different types of content and platforms.

“The work that Jessica is doing at the moment is to extend that different forms of video – short form versus long form – and different advertising formats as well. That’s really groundbreaking work,” Clarken adds.

“The Australian market we’re focusing on to get different assets out there that can build this picture. But the capability to measure platform is already there and in play in the US market.”

Although the capability is there, reaching a consensus on how to measure success is a more challenging proposition with many competing agendas at play.

For example, should the same viewability standards in television apply to digital video If they want to play in the same space, and if so, should standards be increased to TV (100% viewable, audio on for half an ad’s duration) or lowered to the MRC baseline definition of viewability (50% of pixels for two seconds).

This is a particularly thorny issue for publishers because differences in definition such as the duration an ad needs to be watched or how many pixels need to be in frame have a huge outcome on the number of paid impressions.

When the MRC first developed its viewability standard for digital video and tried to apply TV standards, it faced pushback from the largest digital platforms and the benchmark was cut back to 50% of pixels and more than two seconds in duration.

In the US, Nielsen is working with marketers, agencies and media owners to come up with solutions that meet these baselines rules but also allow flexibility increase thresholds and criteria.

“It’s one of the conversations we’ve been leading in the market here because there aren’t clear agreed upon rules for making those comparisons across the screen,” Hogue tells AdNews.

“We’re getting people around the table to discuss different ways to apply viewability protocols. For example, if it’s a short form piece of content and it’s rendered on the screen of a certain duration, what are the right ways to compare that from a marketing perspective to a piece of television content?

“There are some ways to do that which are appropriate and sensible and other ways that maybe that combination of rules will yield a weird outcome.

“The direction we’re going is to enable a lot of different capabilities so that lots of different comparisons can be made. Part of the reason we’ve been doing that is because we’ve seen different user cases where marketers and their agency buyers and planners want to make different types of campaign comparisons based on their campaign objectives.”

In essence, it allows the market to move forward with cross-platform measurement as the industry grapples over comparability standards. Clarken says the objective is to try to "line them up as much as possible”.

“The new conversation that’s opening up, which is really interesting is viewability for the actual content because when you think about the rules that apply to television content, the digital-first publishers want to make sure when we are measuring them they are measured to a comparable standard.”

In the US, the MRC hasn’t yet devised a standard for cross-platform measurement of content. It is working towards a set of guidelines which is expected to go to market for public comment next year.

A major bone of contention is how TV and digital video audiences are measured. Digital video metrics look at the number of times a video has started and run for a few seconds, known as a view, as a proxy for audience size. Television considers the average number of people who watched a television program in its entirety.

“The TV industry would find that unfair because they have to pass a certain threshold to realise a video has been watched,” Clarken says.

“The digital industry is trying to acknowledge that in order to create a comparable metric they have to step away from video starts.

"They have to realise that a video has to be rendered on a screen, all pixels need to be in place, it can’t just be audio only and there needs to be a duration threshold that constitutes that video has actually been watched in a comparable way to how TV screens have worked.”

The IAB's MeasureUp conference takes place next Tuesday and will feature Hogue in a presentation about total audience measurement.