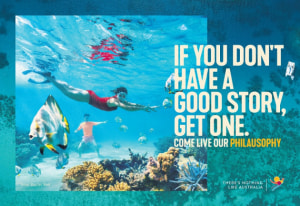 Tourism Australia has released its $38 million campaign Come Live Our PhilAUSophy to mixed responses from both the advertising industry and consumers.

The campaign, the next iteration of There's Nothing Like Australia, will be rolled out in 15 key tourism markets over the next three years to attract more visitors to Australia.

The biggest criticism so far is the word "philausophy", which The Guardian called an "awkward, crow-barred pun".

The creative was developed by M&C Saatchi and Digitas, appointed to the account last year following a competitive pitch process which involved around 20 agencies.

UM has continued to handle all media for the account since winning it in 2016.

AdNews reached out to creatives in the industry to hear what they thought on the campaign. A number of agencies declined to comment due to being involved in the pitch process.

Host/Havas ECD Jon Austin
Launching a new brand platform ain’t easy. Especially when it’s for an entire nation. While I have no doubt M&C and TA will create some brilliant, timeless stuff together, this one has me scratching my head a bit. Not just creatively (‘difficult second album’ is an understatement when the last campaign was Dundee), but also functionally; it feels like a major requirement of a global tourism campaign is its ability to translate in multiple markets. Will philAUSophy work in China? Or even the UK? It feels like the platform hinges off a pun that only those well acquainted with Australia will get. That said, it’s also likely that this would have been researched to within an inch of its life. And if it got through that onslaught, shit, maybe I’m the one who’s not getting it.

Thinkerbell founder and consumer psychologist Adam Ferrier
Getting the tone right for Australia is half the challenge and I reckon they’ve done that well. There are bonus points for using the quokka so prominently. Rottnest Island should be the epicentre of any Tourism Australia work. I like the idea of having an Australian philosophy as I reckon that’s what we are exporting to the rest of the world, as it’s the attitude of Australia people fall in love with. Is philozophy better, or Aussietude - Not sure. But the spirit of the work is about right. And in Australia about right, is job done.

The Royals deputy ECD Seb Vizor
For someone who was sold the Aussie dream first-hand, I really appreciate the insight of bottling the feeling that Aussies feel every day; it's something inherently unique, so the strategy is spot on. But unfortunately, the execution doesn't quite live up to it. It feels a little dated visually and I believe the wordplay isn't overt enough, so will likely go over the heads of its intended target. When it comes to getting people to fly halfway across the world, it needed to progress from just telling people, to making them actually feel it. Just like Tourism Tasmania recently nailed.

Ikon ECD Rob Martin-Murphy
I must admit, when I first read philausophy, I thought I was going to be greeted by a laconic character called Phil, showing us around this great country. Makes sense. After all, we’ve had Hoges and Dundee: The Son of a Legend Returns Home before, so this seemed like a natural extension. Instead, when I saw the campaign, I was greeted by two overwhelming realisations. Firstly, I am a bit dim. And secondly, Tourism Tasmania stole a march on the mainland with Come Down For Air.

Daylight Agency ECD Chris Mitchell
Look, I don’t want to be negative, I just think the campaign would be simpler and just as workmanlike, if you lost the philausophy line. It’s not needed and doesn’t seem to connect to the idea. These people aren’t philosophising about the world, the universe and society, they are talking about what they do, besides, ‘There’s nothing like Australia’ is strong enough, why complicate the message? If the intended market is China, Japan and SE Asia, English is mostly a second language and the locals (read potential visitors) really struggle to get slang or word play. They take things literally. They will absolutely love the kangaroos but they won’t understand what philausophy is or means (who does?). Overall, I don’t mind the approach of using real people relating to their work but I don’t see this as the next ‘Dundee’- if indeed that is what it is meant to be.

Ingeous Studios creative director Leigh Harris
From a quick view over some of the first campaign creatives and messaging the ‘Come live our Philausophy’ delivers a real Australian attitude and feel, and gives a strong message to an international audience to come and experience Australia’s uniqueness and enjoy our Country with us. The two things that M&C Saatchi, Digitas and UM got right was that they dialled down the overuse of what they call ‘true star power’, and enhanced the local influencer. I love the ‘hear from the locals’ aspect of the campaign. It’s great to see it also delivering more on connecting to Aboriginal and Torres Strait Islander culture, which is something that really needs to be pushed throughout campaign more. Still unsure about how the ‘Philausophy’ will be received internationally to non-English speakers, but the aesthetics will deliver a strong message.

Common Ventures ECD Brian Merrifield
I like it. I see how it’s going to work internationally. The line Come Live Our Philausophy challenges people to reconsider their own way of living and what they’re missing. Through its unscripted, character-driven narratives and great OOH copy, they’ve created a fresh take on the Aussie attitude. The locations are there and look fantastic, but it’s the attitude of the people and the experiences that really makes this campaign shine. I think the naysayers have misplaced their criticism of the word philausophy. They're missing how it brings to life Nothing like Australia in a flexible and memorable way. I can’t wait to see how this evolves over time.

Town Square creative director Brendan Day
The pun makes me cringe. But the premise is nice. The question for me is whether nice is enough and what’s next? As a traditional headline driven campaign, I think the work falls flat given the opportunity. However the press release promises that there is more to come. I think it’s hard to be too judgemental without knowing how the brand plans to bring the idea to life. I’m optimistic that you could take the spirit of the work and take it in a million different less expected directions. Fingers crossed that’s the case.

Redengine SCC creative director Duncan Shields
Come Live Our Philausophy. Hard to argue with that, eh? Great line with a clear call to action and a platform I can see working well, not just with new work to come but also alongside TA’s greatest hits such as Dundee. And whilst we’re on that subject, there are few acts-to-follow as tough as that, I reckon. The beauty of Philausophy is how broad it can go. The watch-out for me, is making sure it doesn’t get so broad that it ends up meaning nothing. Looking forward to some awesomely philausophical executions.