Creative Review: Why do we still pigeonhole parents? 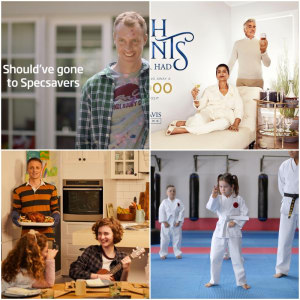 Mum in the kitchen and dad out in the backyard. The only thing more predictable is the monster in Scooby–Doo being someone in a mask. But, is adland catching up with the times? Do we recognise that dad isn’t the careless doofus or that mum isn’t wearing an apron? Here, we asked the industry to weigh in on how parents are portrayed in ads.

Here's who we asked to comment on parents' roles in top ads:

"These four ads tap into the themes of parental servitude wrapped in idealistic white picket fence homes. They showcase the inherent needs of a family — to protect, support and provide, even though dad’s a bumbling idiot. Cooking, taking kids to classes, building cubby houses or acting as their bank. Parents are shown to be valued based on their contribution to their children, which is one of the greatest fears of any parent."

"It feels like we’re moving in the right direction and finally depicting parents in a more honest light. It’s good to see advertising beginning to reflect the broader spectrum of parenting experiences. Not just the perfect moments, but what it’s really like when kids exert their personalities and that it’s normal for parents to make mistakes. However, it’s slightly disappointing to see gender stereotypes still the norm."

"When it comes to parents in advertising they often fall into two camps, mum and dad. Mum generally has her shit together amongst a sea of chaos, whereas dad on the other hand tends to play the fool. I can’t help but feeling that three of these ads, albeit entertaining, fit the mould. The standout of the group is 'The Rich Parents You Never Had'."

THE RICH PARENTS YOU NEVER HAD

SS: I was confused by this ad when I first watched it and had to watch the long–form content on the campaign site to get the full picture. It is said that the ‘bank of mum and dad' is the fifth largest bank behind the big four, so you can’t argue with the insight. While it’s great to see a brand try and do something different in this category, the idea and execution is a miss for me. I was left feeling pretty underwhelmed while it didn’t tell me enough about Porter Davis and what they offer.

HL: Spot on insight with many first home buyers relying on the bank of mum and dad, but this fell down in its execution and left me a bit confused. Are they real people? Is this meant to be funny? Ultimately, it’s a sales promotion for a brand that’s not well–known, but it didn’t leave me feeling like I understood why Porter Davis? Real or not, the baby boomer parents were well–cast and felt like a realistic depiction of an older couple in Australia.

TH: So clever. We are reading everywhere about millennials being priced out of the housing market, with many resorting to parental funding to get their foot in the door. I love that it heroes wealthy ‘parents’ who don’t have any legitimate children. It’s a cheeky, attention–grabbing spot that illustrates a relevant insight in a very lateral, yet enticing way.

SS: How many clichés can you fit into one ad? This one does well to showcase the one–touch button feature, but does poorly at showing anything but a suburban family; 2.5 kids, where mum cooks, dad’s in a garage full of junk pretending to be handy and the dog’s eating homework. Just can’t get past the line that mum feels really ‘clever’ by being able to pause the cooktop.

HL: While I like that the household is a bit chaotic with kids being kids, I can’t get past the fact mum’s in the kitchen with the perfect solution to multi–tasking, returning all back to how it should be. It feels old fashioned, out of touch and a bit frustrating.

TH: Despite the mum in the kitchen, dad in the workshop and dog ate my homework clichés, this is a sweet ad that doesn’t take itself seriously and manages to seamlessly weave in a demo without you really noticing. It is also based in truth. As a parent you definitely recognise your children’s range of screams and whether or not they’re worth leaving the stove to attend.

SS: I like this ad — not only does it entice your engagement with the challenge of finding all the mistakes, it also delivers it in a way that is true to the long–running Specsavers' strategy. You do want to watch it a few times to pick up on different mistakes. Cleverly executed — less about a bumbling dad and more about staying true to the core idea.

HL: Poor dad puts in all he’s got, gets it wrong yet again, and all mum can do is roll her eyes as if she’s not the least bit surprised. While the parents' roles are as expected, the ad itself finds a compelling way to get you to watch until the end. And even to discuss it once it’s over.

TH: The ‘spot the mistakes’ challenge is such a great set–up to engage the viewer and link directly to the brand. The feminist mother in me struggles with the princess, fairy twins, and dad being the fool on the tools, but I envy mum having time to read the paper. I replayed the ad about 15 times to find the mistakes. Got to 13. Maybe I need to go to Specsavers.

SS: Like Specsavers, AAMI has also had bumbling characters in their ads that are lucky to have been with AAMI. I like the ad’s tone and it’s great to see that the formula for AAMI’s ads still works this many years on. I have a young strong–willed daughter so this ad resonates with me …and I don’t take myself too seriously so I can relate to the dad in the ad.

HL: A light–hearted take on life insurance that’s a nice break from the ‘life is precious’ ad I’ve seen a few too many times. It says to me AAMI is a different insurance brand that doesn’t take itself too seriously. While it’s good to see dad is involved and not exactly perfect, he is predictably unco–ordinated and embarrassing, needing to be saved by a woman, managing again to fall perfectly into gender stereotypes.

TH: Karate Camilla lives up to the AAMI slapstick humour that we’ve all grown up watching. It’s bang on brand and it’s nice to see the father daughter relationship unfolding with dad empowering her. Poor old dad embarrasses himself again though, geez, they really get the tough gigs. I wonder why we always end on a smile at dad’s expense.