Creative does good: Agency urges AFL fans to turn their backs on racism 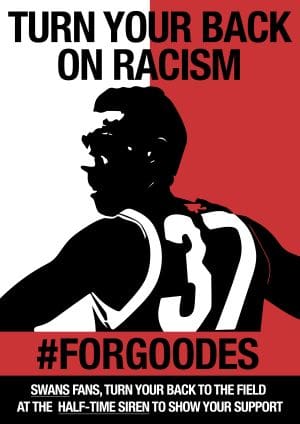 Full-service agency 303Lowe wants the crowd at tomorrow afternoon's Sydney Swans and Adelaide Crows clash to turn their backs on racism as a sign of support for player Adam Goodes.

Goodes has been making headlines this week since The Sydney Swans granted him indefinite leave from the club, due to the emotional toll he faces from being booed by fans each time he plays.

The booing has been described by some, including Victorian Premier Daniel Andrews and former prime minister Kevin Rudd, as being racially motivated.

In order to show its support for Goodes, 303Lowe wants the home crowd at the SCG to stand at half-time and turn their backs to the field, as a way of showing that fans are turning their backs on racism.

To get the message out the agency has created and printed 10,000 flyers and has hired people to hand them out at tomorrows game, all at a cost to the business.

Nick Cleaver, CEO of the agency told AdNews that he is in no way doing it for recognition, rather he feels extremely strongly about what is, in his opinion, serious racial vilification against Goodes.

“He's being racially vilified, and I think it's important we stand up against racial prejudice, we felt there was something we could do,” he said.

Cleaver said that the agency would like as many people tomorrow to stand up and turn their back as a show of support for Goodes and the trauma he's suffering at the moment, and to show it shouldn’t be tolerated by society as a whole.

“I think it's despicable the way that certain media organisations are talking about it and making it a personal issue towards Adam Goodes,” Cleaver said.

“I'm not an AFL supporter, but I'm a person who believes in racial equality for people. Because he's a man who's got the courage in his convictions to stand up in what he believes and not tolerate being victimised, I think we should support him.”

Those who want to get behind the campaign can do so at the game, or via social media using the hashtag #ForGoodes.